Do you take your teddy to bed?

There was a study carried out recently that said that one in six adults take their cuddly toys to bed with them. I'm not one of those one-in-six  [unless you want to include Mr A in the cuddly toy category!] so it must be you? No? So who are these teddy huggers then? Not that it's any business of mine.

Apparently the study was carried out by the QVC TV Shopping Channel. I can't help wondering who they asked. They didn't ask me. I'm never asked about any of the myriad of surveys that appear in the newspapers. They report on anything from whether you have milk delivered to your house to whether you were breast fed as a baby, but I was never one of those people who were asked, never, ever. I think I can feel an attack of deprivation coming on. *places back of hand on forehead*

To return to the teddy huggers, why would anyone want to know if I take a cuddly toy to bed with me? I certainly do have a favourite teddy. In fact, I have three favourite teddies. 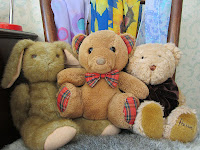 I even took one on holiday with me and Mr A once, just for a joke you understand. His name is Teddy Tumpkins and he enjoyed the holiday immensely...
...but he doesn't come to bed with me and even if he did, what difference would it make to anyone, especially to the people at the QVC TV Shopping Channel? And I wonder how much the study cost? And who paid for it?