More than just a ferry

Last week, we visited Liverpool - my first visit to the City. We stayed in a hotel near the Albert Docks, an area alongside the Mersey River that has been developed into a tourist attraction for lovers of all things both maritime and Beatles related.

My first excitement was seeing the Liver birds on the Liver Building. There was a 1970s television series called the Liver Birds and so I stood and gazed up at the birds, just like Nerys Hughes had done every week on the telly.
(I discovered from a tour guide that the clocks were made in Leicester - so proud!)

My second excitement happened as we walked through Albert Dock towards the river. A busker was playing Ferry Cross the Mersey and there I was looking at the actual Mersey River. I didn't expect to get emotional but I had to blink back tears. It was a mixture of nostalgia and a kind of raw emotion that only music can invoke - all this and we hadn't yet been to the Beatles Experience museum.

It was clear that the Beatles had to wait. My priority was to go on the ferry across the Mersey, just like Gerry and the Pacemakers had done when they sung about it all those years ago. The ferry is now painted in psychedelic patterns (I'm guessing it was a boring grey in the 70s) and every time it docked they played the tune and every time they played the tune I got all emotional all over again.

So much emotion is exhausting... 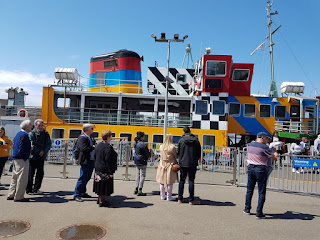 but I loved every minute of it... 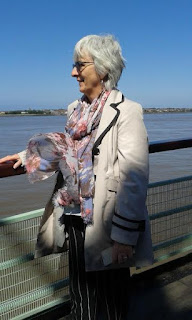 We went on to visit the Beatles Museum and the Tate North Gallery, the Maritime Museum and we had a tour of the City on an open topped bus, but nothing could beat sitting on that ferry and listening to that tune because it's so much more than just a ferry. It's the soundtrack to my teenage years.

The spammers will not stop me from blogging

I have been blogging here for almost ten years. My first post was in November 2009. Back then receiving comments from you, the reader, was a joy, an added bonus to the privilege of being able to post my thoughts, problems and achievements in this most public of places. Now I delete numerous spam comments daily. I wouldn't mind if they had been written in a fluent - or even semi-fluent - way but they seem to be auto-translated with the syntax in places that English syntax was never meant to be. Consequently they make little or no sense and are never related to my blog post.

It is for this reason that I am now only allowing members of this blog to comment, so apologies to any genuine passers-by who are desperate to contribute to my myriad ramblings - but thank you for visiting anyway. I'd like to particularly mention two fellow bloggers who have, over the years, faithfully visited and commented on my blog. I really appreciate their support and friendship and would be delighted if you could pop along and visit their blogs. Joanne Faries blogs at Word Splash and Hilary Melton-Butcher blogs at Positive Letters


I have finally recovered from the MA experience, my feet have just about touched the ground once more and I am submitting poetry. I've sent three poems about journeys to the Myslexia call for themed submissions and I've also submitted to several other magazines including Strix and Granta.

Yesterday I sent two poems to the Writing East Midlands Aurora Competition. They are accepting short stories and poetry and the closing date is 26th June, National Writing Day. If you fancy entering here's the link: Aurora Competition

If I get any good news from my submissions then you will be among the first to know! Have a good rest of June and here's hoping it has finally stopped pouring with rain.