Last month I blogged about our Heritage Lottery funded project to catalogue and research the headstones in our local cemetery. You can read more about it here. Thanks to all those who commented. Some of you asked for updates and so here is my first.

We’ve been photographing headstones - not as easy as it sounds. Some headstones slant. Some are subsiding. This is precarious work! Some cameras run out of battery half way through a session. Some people [ok, so it was only me!] are so out of condition that squatting down to photograph one stone after the next is more painful than a step-aerobics class. 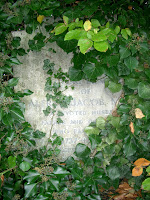 Overgrown shrubbery posed yet more problems. The cemetery is surrounded by a huge old hedge with trees growing through the hedge and, in some places, hanging over the stones. Cameras had to be repeatedly discarded while we removed ivy from stones, lifted tree branches, pinned back bushes, covering ourselves in mud, leaves and unidentified insects. [Shudder!] But the main problem has been the weather.

I knew that the rain would be an issue so when we arrived at the cemetery on a clear, sunny autumn day we thought how perfect it was… until we started to photograph. The sun cast such heavy shadows across the marble headstones that our automatic cameras couldn’t cope, and when it came to photographing the shiny granite headstones, all we got were shots of the photographer reflected off the granite. So if anyone can forecast when the next dry, dull, not-too-cold day will be, I would be very grateful.

The photography is almost completed. I’ve booked two training sessions at the Records Office and we’ll soon be absorbed in researching some of the more obscure names that we’ve photographed. You can be sure there will be problems. It won’t be as easy as they make it look on the TV programme, ‘Who do you think you are’ but I could be wrong so watch this space. I’ll be blogging about it as the project proceeds, warts and all!

If you're local to Leicester and you'd like to join our group of volunteers then let me know in the comments below or email me at rosalind.kathryn @ gmail.com

I have three blog ideas tumbling round my brain at the moment. The more I think about which one to choose, the more I find that the issues are linked and so I shall discuss them all and I wonder if you too will be ashamed of our society when you've had time to think about the disparity.

Yesterday morning I listened to Grayson Perry's Reith Lecture on BBC Radio 4. If you missed it you can read the transcript here, although it loses something by not hearing the man himself with his fascinatingly quirky personality. It was a great example of how someone can 'cock a snoot' at the establishment so much more effectively from within but that isn't the issue I'm picking up on here. It's the fact that Perry's pottery once sold for whatever he could get for it. Now that he's a famous Turner Prize winner his works command vast sums of money.

Moving on to last night and the announcement of this year's Booker Prize winner, Eleanor Catton. The youngest ever winner at the age of 28, she was awarded a cheque for £50,000 for her book The Luminaries. I congratulate her but I also question the value and our use of money in today's society because my third issue is...

A headline in today's Independent Newspaper states, "Britain's Use of Food Banks Triples". Between April and September of this year the Trussell Trust distributed food to 355,985 people, including nearly 120,000 children. Until last year I knew nothing about Food Banks and was surprised to learn that a friend volunteers at her local Food Bank. She explained that people are given three days' worth of food. These are not society's drop-outs but people who are desperate to feed their families. Many of those who she helped were having money problems through no fault of their own. One had to wait for a payment cheque which had taken longer than usual to arrive. Another explained that his allowances had been changed which meant there was a gap in payments and, although the money would be back-dated, he had no savings to draw on.

The article in The Independent goes on to say that the Red Cross "announced it planned to distribute food aid to the needy in Britain this winter for the first time since the Second World War." What kind of society awards five and six figure sums to people who excel in the arts while vast numbers of people are struggling to feed themselves and their families?

How can we justify giving, with one hand, vast sums to successful individuals in the Arts world and, with the other hand, food parcels containing three days' worth of food to hungry families?

Ey Up, Me Duck

This year National Dialect Day will take place in Devon from 18th to 20th October. I think I'm right in saying that the National Dialect Day is not so much concerned with the accent people have as the alternative words they use. I'm sure they have lots of amazing words in Devon but we have our fair share in Leicester too.

You only have to go down to Leicester Market to be addressed with 'Ey up, me duck' instead of 'Good morning, Sir.' And if you do anything to surprise the stall holder he's likely to respond with, 'Ooooya beauty!' or 'Ark at him!'

As I've lived in Leicester all my life I'm not too sure which colloquialisms are local to Leicester and which are in general use throughout the country. Is it just in Leicester that you say:

'frit' when you're frightened

'Charlie's dead' when you're petticoat's showing

'The Oakey Man' for the Ice cream van

'Don't mither me' for don't bother me

If there are any Leicester people reading this, then please add to the list. I'm sure there must be many more local words.

If you're not from Leicester then what local dialect words do you have round your way?