What kind of women's voices can you hear? 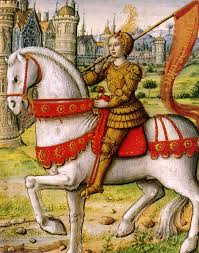 On this day in 1431 Joan of Arc was burned at the stake. Her life was so interesting that this blog could cover anything from the power of religion in wartime, to visions of angels, to the Hundred Years War, but I'm more concerned here with the power of her voice.

When she first took charge of an army in 1429 she insisted on the removal of all camp prostitutes. She forced the men to attend Church. She banned swearing and the looting of local civilians. The result was not an uproar from the French army but a boost in morale. They were now fighting with a powerful woman, a saint-like figure, at their head rather than the unsuccessful Charles VII. Yet, ultimately she paid the price for her powerful voice.

Move on to this day one hundred years ago. Emily Davison would have been planning her great bid to make England's leaders listen to her and her fellow Suffragettes. She had not planned to kill herself. She had a return train ticket in her pocket when, on 4th June 1913, she fell beneath the hooves of the King's horse but she intended to make the headlines, to make sure that women's voices would be heard.

Fast forward to today. We may have votes for women but only four of the UK Government's twenty-seven cabinet ministers are female, such a disgraceful statistic that it has earned a paragraph all to itself.

So what kind of women's voices can I hear? Ones that tell of girls being groomed by men for under-age sex, forced marriages, child brides, refusals for women bishops while yet more stories emerge of priests abusing children. I could continue but it's far too depressing so I'll end with a question, albeit a rhetorical one...

When will women's voices tell a more positive story?

A Week of Adventures

Our adventuring began last Sunday in Manchester with one of the GrandLittles. She wanted to build a bear for her birthday so we took her on Manchester’s amazing Metro system to the vast Arndale Shopping Centre. Who knew that bear-building would involve so many decisions?


The Manchester trip was a success, a lovely new bear had been 'born' plus we'd had lots of cuddles with youngest GrandLittle to round things off before we drove back home down the Motorway.

Hardly had we returned from Manchester than we were on the road again heading down South to London. As some of you may know, Mr A has to have regular health checks at a hospital unit that specialises in Amyloidosis. The results were good. He doesn’t have to go back for a whole year so that was a relief and we managed to squeeze in a few more adventures in-between all the testing.

First of all I rang @CarolJhedges on the off chance that she might be able to meet for a coffee. The coffee wasn’t logistically possible but we had such a good chat that I felt as if I was talking to an old friend who I'd know for years. [Don’t you just love the Internet?] And we will meet up some time soon, we really will!

We usually go for the London hospital tests by train but this time we took the car so we were able to drive off and explore. There’s something exciting about driving past places that you only normally see on a Monopoly Board, plus we met up with family, went out for a lovely supper in Hampstead and were even able to pop in to see Daughter on the way back home.

But now I have work to do, washing to be sorted, no food in the house and so…

Just a quick addition: Thanks to Lizy for pointing out that it looks like we did it all in one day. Mr A has two days of hospital tests and we were in Manchester all of last weekend.

When I was 9 years old we moved from a small terraced house with a backyard to a semi-detached house with a real garden. That was when our Dad became a gardener. He had never owned a garden before and so he started with plants that he knew.

First of all Dad planted rose bushes.
I have some lovely rose bushes in my garden especially one that my sister bought for a rather large and special birthday.

Next he moved on to annuals; blue lobelia, white allysum and small marigolds that he planted in a neat row every spring.
I don't have marigolds. The slugs love them too much. But I do have lobelia and allysum each year and they always remind me of Dad.

Dad soon became more adventurous. I'll never forget the day he came home with a Broom. Its name gave me the giggles. How could a broom be a bush?
Now I too have a Broom. It's a smaller variety than the one Dad bought but it's beautiful. It smells headily sweet at this time of the year and it reminds me of Dad and his first ever garden. 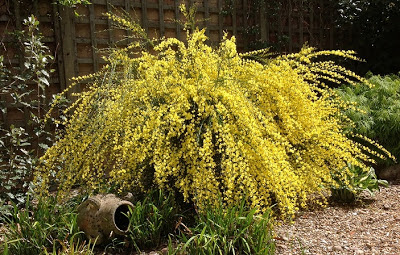 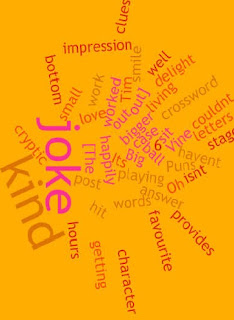 I love playing with words. I can happily sit with a cryptic crossword for hours and delight over such clues as:
Big impression made by small character on the stage (6 letters)
[The answer is at the bottom of this post in case you haven't worked it out.]

Puns are my favourite kind of joke... I couldn't work out why the ball was getting bigger, and then it hit me. No? Oh well, it made me smile. It's the kind of joke that provides Tim Vine with a living, isn't it?

Unintentional malapropisms have me helpless with laughter. Apologies to regular visitors to this blog because I have told this anecdote before, but I once asked the ice cream seller for a large cornflake instead of a large cornet with a flake, I laughed so much I ended up in a heap on the pavement [Don't know who left the heap there - boom! boom!... Sorry!]

Spoonerisms are equally amusing. I've mixed up the phrase 'nook and cranny' so many times that now, when things go missing, I regularly search in every crook and nanny. And whenever the weather forecaster announces that there will be frost and fog I am compelled to add, "Or do they mean fost and frog?" Humour me. April was a long month!

I recently heard of a different kind of word mix-up, a mondegreen, the mis-hearing of song lyrics. As I've just spent the entire month of April immersed in song lyrics I thought it was serendipitous when, half way through the month, I turned on BBC Radio 4 as they were discussing mondegreens. I hope I didn't commit any glaring mondegreens during the A to Z. I was extremely careful because I have been known to sing the occasional incorrect song word. My best remembered mondegreen was a song called The Wichita Lineman. I was convinced that it was called The Witch of Alignment.

If you've made any glaring gaffs over song words or well-known phrases then do please share them. I'm sure we could all do with a smile after the strains of a cold, dull and extremely busy April.

[The answer to that crossword clue is impact. Good, isn't it!]