Power Walking: On the 13th August I said in my blog post that shielding was about to end. Wrong! Six weeks on and Rod is still being instructed to shield until 5th October after which time he is miraculously safe to go out. We have, of course, been going out because we've been walking. On that same 13th August blog I said that we'd been strolling. We are now power walking - I trust you're impressed!

Brocks Hill: Yesterday our walking took us to Brocks Hill. It must be almost fifteen years since we used to take Josh, our lovely but rather naughty dog, there. The area was first designated as a country park in 1999 and when we went dog walking there it was nothing more than a series of fields with sparse plantings of saplings. You could see to the farm land beyond and many a time we would be standing, squinting into the distance at a disappearing ginger and white tail as we yelled, 'Josh, come back!'

Building Dens: After Josh died we no longer went on those kind of walks, in fact we rarely went walking together at all until lockdown - one of the few positives to come out of this pandemic. It was amazing to see how those sparse saplings are now thick wooded areas. There are themed nature trails, wicker sculptures, woodland paths and ponds teeming with life but one area particularly caught my eye. It's called The Den Building Area. Just imagine the games we could have played if we'd had resources like that back in the day. 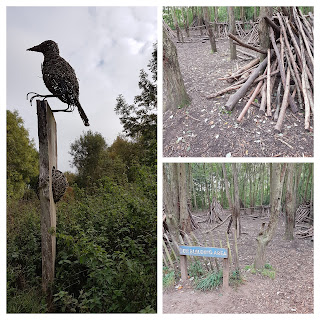 The Green: When I was a child I used to play on a bare plot of land that we called The Green even though it wasn't green. It was a kind of muddy brown. It was the route to school and to the bus stop so we used it regularly. When it rained half of the plot flooded. We called that The Puddle. After school I'd hang around on The Green with my friend Theresa and we'd create imaginary worlds with nothing more than weeds and piles of stones. Imagine the worlds we would have created with a Den Building Area like the one at Brocks Hill.

A scarily senior moment or has my car taken control?

It was the last day of summer, the day when the sun was about to move into Libra so that by the time evening came it would officially be autumn with forecasts of rain and chill winds. We decided it was a good day to go for a trip out. There's a country park that we've never visited called Watermead and it's only about 20 minutes away. It has clearly marked and measured walks around a series of artificial lakes in an area of low-lying land, shielded from the extremes of weather. I worked out the route and we set off but things don't always go the way you plan them.

Do you ever get in the car, drive off and arrive at your destination but can't remember how you got there? Well, on this last day of summer my car took that experience one step further. I turned onto the A50, pulled in for petrol (with face mask in place and copious lashing of hand gel at the ready) and was just pulling out of the petrol station when I turned to Mr A and said, 'Why are we on the A50? What are we doing here?' (A scarily senior moment or has my car taken control?) Somewhere along the way I had taken a wrong turning so that now we weren't heading for Watermead Country Park. We were heading for Bradgate.

This was a good mistake - the car must have known what it was doing. Bradgate Park is in an area of ancient volcanic rock outcrops. I drove to the top car park next to Cropston Reservoir and we walked up to the very top of one of the outcrops. We gasped for breath. We admired the view of ferns and deer and distant fields. We sweltered in the heat and thoroughly enjoyed our trip out. Bradgate Park is best visited on the kind of day when the sun has not quite entered Libra.

That was yesterday. Today it is definitely autumn. It looks and feels like autumn. Our next trip out will be to Watermead and I suspect we'll be grateful for somewhere low-lying and shielded from the extremes of weather. Everything, it would seem, happens for a reason.

Everything is strange right now, not least the High Holy Day observances which begin this weekend. I have decided not to go to the synagogue this year for Rosh Hashonah (New Year) or for Yom Kippur (Day of Atonement). I know that the Synagogue Committee have done their best to make the place Covid safe but I also know what I'm like. I won't have seen most of the congregants in person (I'm not counting Zoom) for over six months and I'll be tempted to linger on the way in or on the way out. I'll start to chat and I'll forget about social distancing. This year I'll say some prayers at home.

I can still serve up apple and honey for a sweet new year. I've bought in lots of lovely food and I'll do some extra cooking and maybe even some baking today and tomorrow in anticipation. On Yom Kippur we say special prayers in memory of family who have died. This year I'll sit in the garden, read through the prayers and think of Mum and Dad. I don't have to be in a special place to do that. Their memories are always with me. However, we are meant to hear the blowing of the shofar (a ram's horn) during the High Holy Day services. I don't have a shofar but the Rabbi has promised to walk past my house blowing his shofar on Sunday afternoon. So for anybody living nearby - you have been warned!

There's little more to say other than l'shanah tovah (happy new year) and here's hoping for a happy, healthy, peaceful and sweet new year for us all - and let's hope the scientists can discover a cure and vaccination for this awful infection very soon so that our lives can return to normal.

The other morning I was queuing outside the bank, masked up in anticipation of my turn to enter when a member of staff came out to check the queue and smiled at me. I smiled back and she moved on. This left me wondering how I had known that she had smiled at me and how did she know that I had smiled back. I decided that it must be in the eyes but then I watched people who were meeting and smiling in recognition. There was something about their body language - an almost imperceptible jog of the shoulders accompanying mask-concealed smiles.

This got me thinking about other aspects of our new body language. The obvious one is the absence of handshaking, hugging and kissing on both cheeks. I can't say that I miss that, especially the kissing-on-the-cheeks bit. I always get confused as to whether it's one cheek, two or indeed three - kisses not cheeks. My timing is so poor during such rituals that I invariably bang noses or catch glasses and end up feeling undignified and inept.

Chivalry is suffering too. (Mixed feelings about male chivalry but I'll hold that discussion over for another blog post.) I was waiting outside our small local chemist today while a man was inside collecting his prescription. As he came out he held the door open for me but that would have meant me breaking the 2 metre rule so I waved him on and an awkward few moments ensued before he realised what I meant.

Post-shopping involves me walking around with my hands in the air rather like a surgeon who is scrubbed and ready to operate. This is followed by the gelling of hands (accompanied by that funny antiseptic taste in the mouth - or is that just me?) Gelling causes me much consternation. In order to put my bag down and get my gel out I have to unlock the car. I can then gel my hands but need to also gel the car keys as they were touched with ungelled hands. I then ponder the car door handle. Surely that should also be gelled - but I've decided that I have to draw a line somewhere. (I've just realised that it also involves my handbag which has not been gelled at all since all this craziness began. What a dilemma!)

What strange quirks of body language have you noticed recently?