In 2007 I attended a writing course. Yesterday I had a chat with the leader of that course and happened to mention that I still refer to her course notes.

“How exciting!” she said. “I’ve been through several computers since then and no longer have those notes.”

My copy had survived because I had written them in one of my many notebooks - see photograph left. (And yes, I did type them up and email them over to her.)

Have we forgotten about paper as we tap away at our computers? I hope not. There’s no saying how permanent this digital form of writing is. We only have to look at the ancient books on museum shelves to see how comparatively permanent they are proving to be. What’s more, paper feels good, smells wonderful and can be tucked into a pocket, thereby preserving anything from a shopping list to a secret formula to a declaration of love.

Five snippets about pieces of paper:

1. The earliest mention of paper is from about 2,200 BC when the Egyptians discovered that overlapping layers of papyrus created a surface for writing on.

2.  Paper made in the last 50 years is more prone to deterioration than paper from about 500 years ago. One of the reasons for this is that modern paper is less likely to contain cotton or linen. It could also be due to the increased use of recycled fibres and colourings.

3.  A student from the University of Leicester has calculated that you would need 136 billion sheets of paper if you wanted to print out the entire visible content of the Internet. You wouldn’t, though… would you?

4.  The maximum number of times a piece of paper can be folded (regardless of its size) is apparently seven. I remember trying this with a class of 10 year olds and it seemed to be pretty accurate. (I now expect someone to post up a comment saying that they’ve managed more folds. I will require photographic evidence, you realise!)

5.  “Peace in our time” conjures up the picture of Neville Chamberlain in 1938 stepping off a plane after meeting with Hitler and waving a piece of paper at the waiting cameras. Some say that it was a convenient prop, possibly a bill for his laundry, but it was, in fact, a private accord signed by Chamberlain and Hitler expressing the “desire that our two peoples never to go to war with one another again.”  So much for pieces of paper!

To end on a more positive note, I still have recipes written on small pieces of paper, now going brown around the edges, in my Mum's handwriting. Precious treausure, indeed.

Sometimes it’s hard to go back. I’m not good at revisiting the past. It always turns out to be one of those ‘lump in the throat’ experiences, but this week I had no choice. This was work. My old school, St Barnabas Primary, had invited me to talk at a school assembly about my Children’s Book of Richard III and sell books afterwards so, of course, I agreed.

A bit of background – I was teaching at St Barnabas for many years but I thought I wanted to progress up the ranks, become a Head one day. I started to study for an MA and I applied for promotion in a different school. The bad news was that I got the job. The even worse news was that promotion meant a lot more work, a lot more responsibility and a job that, in retrospect, was not possible for one person to do and keep their sanity. I kind of, temporarily, lost mine. I left the new job within months on the sick and never returned to full time teaching again.

So, as I said, this week I went back to St Barnabas for the first time in over 20 years and I remembered how warm and friendly it had been and still is and it hit me, with an almost physical slap, what a mistake I’d made leaving that school.

The experience reminded me of a favourite poem. I know I’ve mentioned it on my blog before but it bears a second mention. It is The Road Not Taken by Robert Frost.

Do you ever regret decisions made?
Posted by Rosalind Adam at 21:03

A Quiet Corner of the Garden 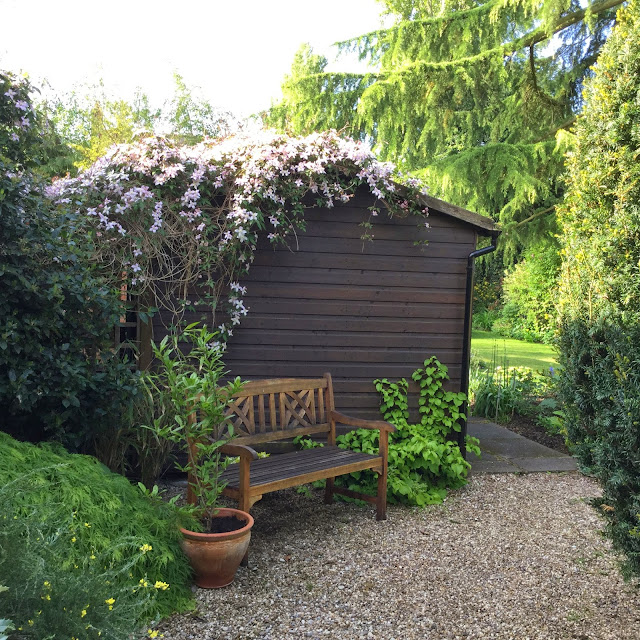 p.s. In response to some of you who have asked, yes it is my garden and that clematis is one of my favourite plants. Lovely, isn't it.

What a week it’s been here in the UK! In fact, for me it’s been an interesting and busy few weeks all round and here are some of the reasons why:

The Election:  I promise this will only be a short moan...

For those who have missed it, most people expected Labour (the left) to do well, well enough to form a coalition government. They didn’t. Cameron and the Tories (the right) now have an overall majority. I'm not going to discuss policies here. Lots of other bloggers have covered that. What I find most surprising is that, everywhere I go, people are expressing their displeasure with the results. So where are all those people who voted another Conservative government in?  ...End of moan!

Children’s Book of Richard III:  The book is continuing to sell really well and I’m delighted with all the positive feedback. I'm still doing schools visits. I may blog about some more of them soon! This week I’ve met with the theatre group who are performing my Children’s History of Leicester in schools. They have plans, funding permitting, to take my Children’s Book of Richard III into schools using the same hilarious format. I’m very excited about this and so am typing with my fingers crossed (metaphorically speaking, of course).

Jewish Voices:  I love the way that my Jewish Voices book in still in demand. I get a steady stream of email requests about it. If anyone would like a copy I have some to spare, courtesy of the Heritage Lottery. It’ll only cost you the postage. Here is a link to the website to remind you: Leicester Jewish Voices

Plus:  And of course I haven't yet mentioned my new writing project that I'm researching (fascinating but I'll save it for another blog post), my regular writing workshops, life, the universe, etc, etc.......

I spent a lovely time with my sister last week in Lyme Regis, in spite of the troubled train journey there (explained in previous blog post). Living in Leicester, we could not be further away from the sea if we tried and so it is a delight to stand and watch the sun rising across the water. I know that the photograph on the left could be anywhere but I wanted to include it because it reminds me of early morning sea watching in Lyme.

Lyme Regis is famous for its Cobb, its fossils and, more recently, for the filming of Broadchurch in its vicinity. I saw it all while I was there and I have photographs to prove it:

The Cobb was originally built around 1313 providing a small harbour which is still used today, mainly by fishing boats. It is famous for a scene in The French Lieutenant's Woman featuring Meryl Streep and Jeremy Irons in a passionate clinch. Sorry! I'm afraid you'll have to make do with me instead! 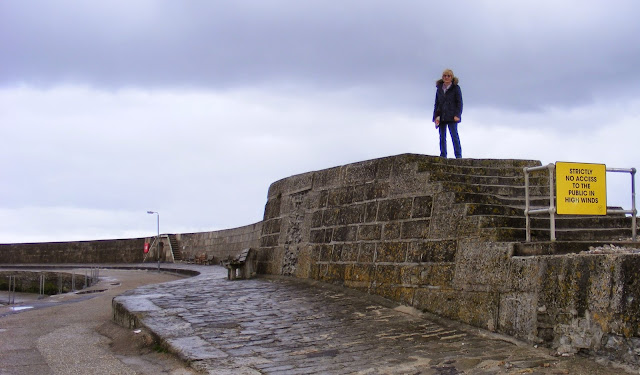 Lyme Regis is on what is known as the Jurassic Coast. This is because many valuable fossils have been found in the area - and continue to be found with every landslip.

A few miles away from Lyme, in Charmouth, the cliffs are continually crumbling and fossils, especially ammonites, can be found even by the most amateur of hunters. When I last visited the area this section of cliff was sheer and there was quite a wide beach. Now the cliff has crumbled to a definite slope and is much closer to the shore line. You can see the cliffs in the background of this photograph. As for the Broadchurch link, the beach huts on the left were featured in the programme. 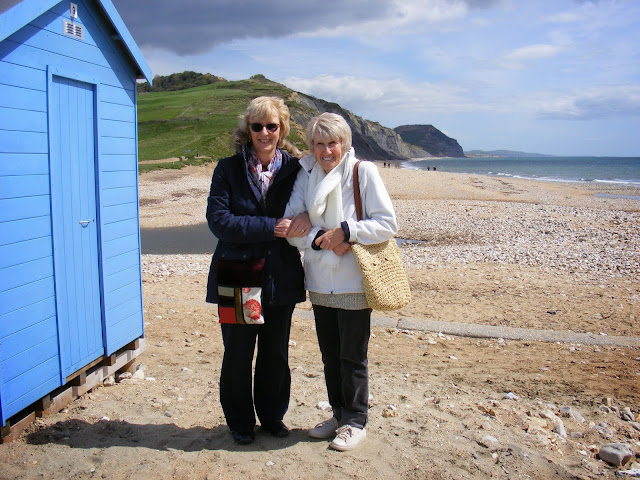 The fossils found at Charmouth date back about 190 million years. My mind can't conceive of that length of time. The Blue Lias Formation is responsible for preserving and for revealing these fossils. You can read more about it here but I photographed an example of a collection of ammonites in a piece of rock that was found in the area. I have to admit that I did not find it myself but I wish I had. 190 million years! Mind blowing! 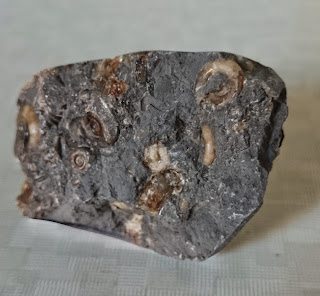 This week I went to visit my sister in Lyme Regis. I took the train from Leicester to St Pancras, crossed London on the underground via the Piccadilly Line to Leicester Square and then the Northern Line to Waterloo. The Axminster train was announced as soon as I arrived in Waterloo. At Axminster I knew there would be a lift waiting to take me to Lyme.

I settled onto the train. I had a table seat all to myself, lots of legroom, my newspaper spread out over the table. “This travelling lark is a doddle”, I thought. But 30 minutes into the journey the train stopped, never, it would seem, to move again.

We were told to leave the train. We were at a small, derelict station. We were taken under the tracks on a rubble strewn staircase that hadn’t been used for many a year. We were then told that we were being taken back to Waterloo. “But…” we all yelled and the staff patiently worked their way round all of us explaining over and over that there had been a suicide. Someone had thrown themselves in front of the train and so the entire line was now closed.

This brings me to the major issue of this blog post. The staff also said that this kind of thing is a regular occurrence. It has, in fact, affected me on a journey once before.

I arrived in Lyme three hours after I should have done. How could I complain when I knew that somewhere in the UK there was a family in total grief and turmoil? I had only missed an afternoon with my sister. I’ll blog about the actual visit to Lyme Regis another time. I just needed to get this off my chest first.