Sur Le Pont: Half a Bridge and Half a Taste of Provence

This time last week we were in Avignon...

on a touring holiday of Provence... 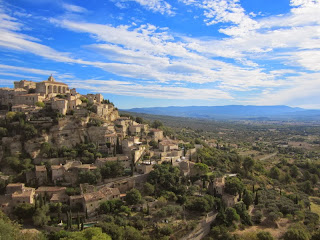 which is a beautiful area of France... 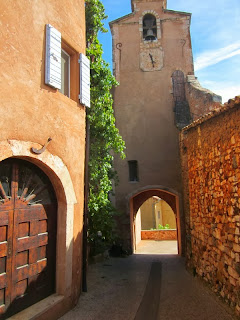 The tour was called A Taste of Provence and that was what we were given.The itinerary covered more kilometres than I cared to count. Unfortunately this meant daily doses of sitting on a coach together with a group of over forty people.

Since Mr A's stem cell transplant this is not the best of environments for him. We opted out of the last two days and, while he sat around the hotel coughing and sneezing and generally feeling grot, I got to see a little more of Avignon than the tour itinerary had allocated.

He managed a slow stroll for Sunday lunch in Avignon's beautiful Place de l'Horloge. We sat in the leafy shade of a street café and watched as the locals closed off the entire length of the main street, turning it into a fabulous bicycle race track. 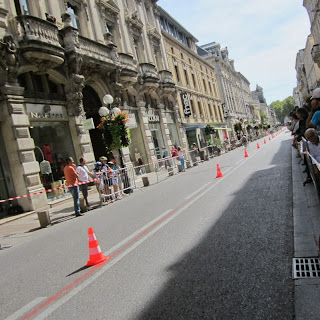 After lunch children swarmed from all directions with an array of bikes and fancy helmets, followed by proud mothers, fathers, grandparents and babies in pushchairs. Each bike race was accompanied by a brass band ensemble and enthusiastic cheers from the crowd. 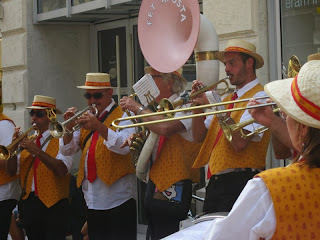 But this was no 'stroll in the park'. There was a pacemaker, the route was long and hard, with the number of laps increasing as the older children took to the track. No child was allowed to drop out, even those who fell off at the start of races [and there were many who did, especially among the younger groups]. Each child was lifted back onto their bikes and pushed off to rejoin the race. We all cheered really loudly for those peddling like crazy at the back. 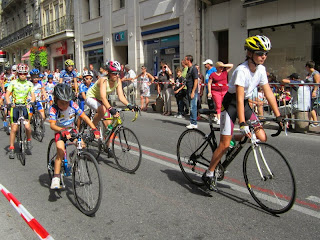 You could tell from the atmosphere that everyone was having a thoroughly enjoyable Sunday afternoon but I couldn't help feeling that there was a serious side to it too. These children were being taught to 'stick at it' to 'not drop out' to 'push themselves to their limit' to 'work as a team'. It was a fascinating insight into the French cycle racing psyche and, although we were both disappointed at having to miss the last two days of our Provence tasters, we were pleased to have experienced an afternoon with the locals.

Mr A. is now well on the mend... but my throat feels just a tad... [coughs pathetically]

Lives Behind the Stones

With many thanks to the Heritage Lottery Team

Several years ago I was fortunate enough to coordinate a Heritage Lottery funded project called Jewish Voices. It involved helping groups of local elderly people from Leicester's Jewish Community to record their memories. The work was fascinating but what made it extra special was that the memories, when gathered together into a book, told a story of demographic and social change in a provincial town during the 1940s and 50s. I hadn't expected the results to be so conclusive and I'm very proud of the book.

I recently submitted an application to the Heritage Lottery Fund [HLF] to run another project, very different but I'm hoping it'll produce just as exciting an outcome. Grant applications are long detailed affairs and I've spent far more hours than I care to count with my Deputy Project Leader, supported by a small but enthusiastic team, filling in forms and working out timetables and costs. It's been a long, nail-biting wait but...

Our application has now been approved by the HLF and so for the next year I'll be leading a team of volunteers as we record and catalogue all the headstones in Leicester's Jewish Cemetery. Part of the cemetery dates back to the early 1900s and is in a poor state of repair. We'll be recording all the inscriptions on the stones while they're still legible, creating a website for genealogical research, producing Interpretation Boards for visitors and, most excitingly of all, selecting a cross-section of names and conducting research at the local Records Office into the lives behind those names. This is why I've called the project 'Lives Behind the Stones'.

If you're local and you'd like to volunteer then let me know in the comments and I'll get in touch. Our volunteer list is growing and we're spending the next few weeks recruiting even more people [you can never have too many volunteers!] for one or all of the following:

About the Heritage Lottery Fund

Using money raised through the National Lottery, the Heritage Lottery Fund (HLF) aims to make a lasting difference for heritage, people and communities across the UK and help build a resilient heritage economy. From museums, parks and historic places to archaeology, natural environment and cultural tradition, we invest in every part of our diverse heritage. HLF has supported almost 35,000 projects with more than £5.3bn across the UK.

This scroll, which has been ‘doing the rounds’ on Facebook, expresses the sentiment so well that I thought I’d post it up here for Yom Kippur, The Day of Atonement, the most important day in the Jewish calendar. It is marked with a 25 hour fast and a day of prayers and begins at sunset tonight.

While I'm thanking those who have helped me...

I knew that if I blogged about that ‘Candy-Crush-related’ obsessive behaviour activity it would shame me into moving on and it has. Thanks to all those who commented. I haven’t quite uninstalled it… yet, but I have moved it to an obscure location on my ipad! 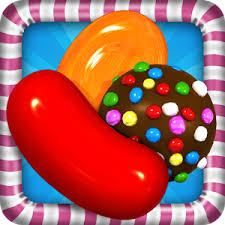 A few days ago a friend introduced me to Candy Crush. I downloaded the app thinking that I could play occasionally in those odd spare moments, like when you're waiting for the kettle to boil. I was wrong. I don't know how the programme writers do it but this game is genuinely addictive and should come with some sort of a health warning.

I can't even begin to explain how satisfying it is when you line up two special tiles [referred to as candies] and watch them explode across the screen because the more candies you destroy, the more likely you are to complete the level and I really want to get to that next level, and the next, and the next... There are, I believe, almost 500 levels. That's masses of 'playing-time' and far too many wasted hours.

To my surprise many of my friends have been playing Candy Crush for some time now. They tell me how they have reached levels in the hundreds. One friend is even on level 300-and-something. They all insist that they never pay for extra goes because here's the other clever thing about Candy Crush. As soon as they get you well and truly hooked they start restricting your access. I've just been told I have to wait 24 hours to try for the next level unless I would like to pay. It's only a small amount but, no, I would not like to pay. I have no intention of paying a  penny to Candy Crush. This is not the first time the game has invited me to pay for 'extra goes' or 'extra lives'. I'm quite sure that some people do pay. It's so easy. Just a click of the mouse. Those Candy Crush writers must be getting rich quick!

So what to do next? I will limit my playing time on the app but I can't bring myself to uninstall it which is what I know I should really do. So if I don't reply to your email/text/tweet/facebook comment then it might just be because I'm playing Candy Crush. If this is the case then I apologise.

Have you been tempted by Candy Crush? Are you addicted to some other game or have you [so far] managed to avoid all such temptations?

It's that time of year again. Sunset tonight will be the start of the Jewish New Year. I mentioned in previous years' posts that apple and honey is a traditional food for this time of year as it represents the hope for a sweet and fruitful year ahead. I'm going to add a wish for a healthy as well as sweet and fruitful year for my family, friends and all the lovely people who visit this blog.

And if you've never tried it do slice up an apple as the sun sets this evening, dip it in some honey and you'll wonder why you don't eat it every day of the year. It's delicious. Enjoy! 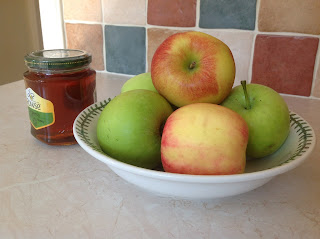