I’ve just started reading Barbara Kingsolver’s The Poisonwood Bible. The fiery Baptist Minister and his young family have been dropped into a tiny isolated village in Central Africa. The locals want to welcome them but the Minister is outraged by their nudity, picking out an unfortunate lady to preach his views at. In the words of his daughter, “…Her big long breasts lay flat on her chest like they’d been pressed down with an iron, but she did seem heedless of it…” The villagers didn’t speak a word of English yet that Minister left them in no doubt of his feelings regarding “…nakedness and the darkness of the soul…”

It’s all about perceptions. The story goes on to mention that the women of this tribe would never leave their homes without first covering their legs down to their ankles and yet their breasts remained uncovered and unnoticed… by the locals at least.

Here in the UK in the 21st century we’re used to religious dress codes. I certainly would never go to my Synagogue without wearing a skirt that was below-knee length and a top that covered my arms and front. It’s called ‘modest’ clothing and it can be easily explained and understood.

Not so easily explained are concerns over wearing night clothes outside the house. I still can’t watch Hitchhiker’s Guide to the Galaxy without squirming at Arthur Dent in his dressing gown. I don’t know why. He’s not showing anything untoward, but then my dressing gown is also perfectly decent, covering me from neck to ankle but I’d hate to be seen in public wearing it.

So now I’ve admitted that I have ‘dress-code’ issues but this week’s ‘nude finger episode’ came as a surprise even to me. Last weekend I had an arthritis flare-up. My fingers ballooned embedding my wedding ring firmly below the knuckle. I tried all the usual methods of freeing metal from finger but in the end decided to ‘sit it out’. On Tuesday morning I managed to ease the ring off but I now had a naked finger. Had it been winter I might have grabbed my woolly gloves. Instead I slipped surreptitiously into a local jewellery shop and bought the cheapest silver ring they had. The difference I felt as I emerged from that shop, ring on finger, is quite inexplicable.

Do you have any unusual dress-code issues?

A natural when it come to matching colours

It's not me who's a natural.  I'm hopeless! It's Mother Nature I'm talking about. You only have to look into my wardrobe to see that I haven't got a clue about colour schemes, and I can never remember what colour any of my clothes are when I'm shopping for new stuff. Even my black clothes don't match each other. Who'd have thought there were so many shades of black? But Mother Nature never has a problem matching her colours. She can even get orange and pink to go together.

She manages it delicately with this double begonia: 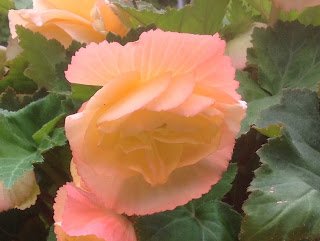 She adds a sprinkling of orange discreetly to this pink echinacea: 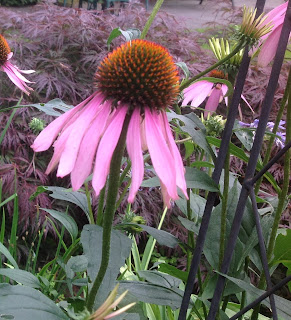 And she's bold and 'in yer face' with this dahlia: 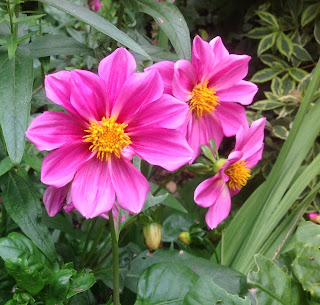 The only way that I can be sure of wearing matching items is to have them all the same colour but again Mother Nature has out-styled me. How about this for a perfect blend of a single colour? 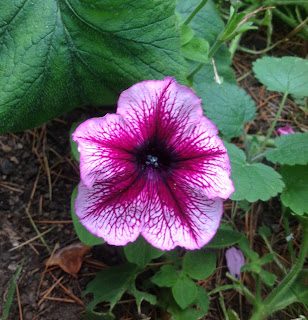 What colour schemes are hanging up in your wardrobe?


All the above photographs were taken this afternoon in our garden and yes it's still looking amazing thanks to Mr A's hard work!

I used to knit most evenings but that was over twenty years ago. Last autumn I got the urge to knit once more but now I'm wondering which of the following sayings is correct.

It's like riding a bike
OR
Practice makes perfect

I paid £50+ for chunky wool. This jacket was exactly what I needed for last year's chilly winter. The needles were huge. The wool was as thick as rope. My knitting created a monster that was as loopy as a dish cloth. I persevered. I sewed it up. I ironed it. I don't know why because it was obvious, even before I pinned it together, that this jacket would fit me plus at least another two large-sized ladies. 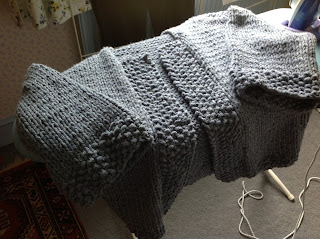 The jacket in the above photo is no more. I hid it away for many months and finally, with a heavy heart, forced myself to unpick and unravel each piece.

I have now bought a different jacket pattern and, after much discussion with the lady in our local knitting shop, Knit One, I'm using smaller needles to get rid of the loopy dishcloth effect but I needed to be sure that this was going to fit so I quickly knitted halfway up the back [causing my fingers much arthritic-related pain] and here is the result. 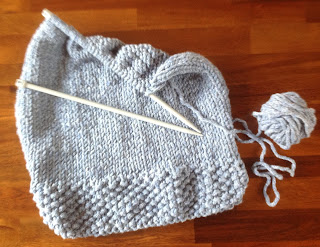 I think this time it might just fit me. I've decided that the most appropriate saying is,


'If at first you don't succeed, try, try again'

So now if you'll excuse me, I have some knitting to do because this jacket is exactly what I need for this year's chilly winter.

"What do you mean you KNOW her?" my friend said. "You've never met her. How can she be a friend? What will you talk about?"

The friend who said these words has never been on Twitter, never blogged and doesn't understand how real friendships can grow via our computer screens...

...and, yes, you've possibly guessed the rest. I met up with Carol Hedges today and we talked non-stop for three hours. [We only had three hours as I was taking advantage of the cheap off-peak train fares. Train travel at normal rates is prohibitively expensive... even to meet a very good friend!]

Visitors to Carol's highly entertaining blog will instantly recognise the car in this picture! 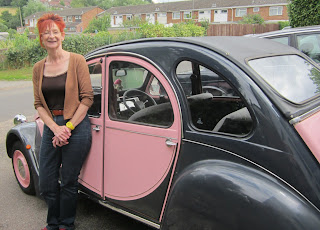 What's more, I've been inside it and here's the proof! 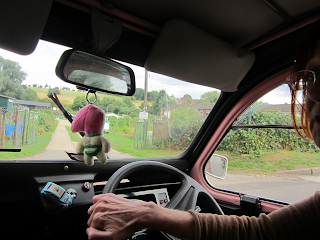 There's a beautifully laid out allotment just visible through the windscreen. We wandered over there and found a kind friend to take a photo of the two of us. 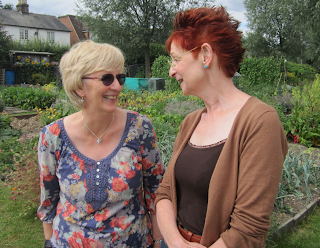 But we were still chatting even as the shutter clicked.

We discovered lots of things we didn't know about each other, like the fact that I'm older than Carol... but only by one month! We talked about blogging, tweeting, writing and lots more besides. I had a lovely time and I'm sorry there aren't more photos. It's just that we were talking so much...

The Freshest Pea and Mint Soup Ever

I'm struggling to keep up with our garden's production of vegetables this year. We did plan to sew seeds in succession but I suspect we forgot to tell the seeds. This morning we tried to ignore the rows of fattening French beans and the perfectly formed mange tout. Instead, Mr A harvested the last of the peas.

Some of them had gone over but here are the very last ones for 2013.

Next I searched the Internet and found a recipe for Pea and Mint Soup. You have to simmer spring onions (from the garden), cubed potatoes and garlic in vegetable stock for 15 minutes. You then add the peas and simmer for five minutes. Add chopped fresh mint (again from the garden), a squeeze or two of fresh lemon, a sprinkle of sugar and season to taste.

At this point I have to admit, it didn't look too appetising but... 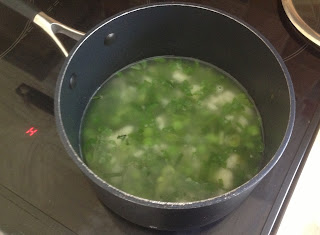 ...a quick wizz it in the food processor and...

Two bowls of soup! Healthy, tasty and undeniably fresh. Most of it was still growing a few hours ago!

Last Thursday was the hottest day of the year. It was also the day that Daughter and I decided to meet in London for lunch and a theatre matinee to see Fences at The Duchess Theatre. We are truly mistresses of timing.

We rendezvoused in a sauna-like Covent Garden determined not to let the heat spoil our day. Lunch was a sweltering affair with much wafting of fans and sipping of ice cold drinks. We feared that such a small theatre as The Duchess couldn’t possibly be air-conditioned. Thankfully we were wrong. The theatre was indeed tiny but it was also beautifully cool. The production was amazing but more of that below. This part is about being hot.

We emerged from The Duchess into a blast of heat and went in search of freshly squeezed fruit smoothies, idling our time through the steam of London’s rush hour. We had plenty of time before my train left for Leicester, but as we approached Covent Garden Tube Station the shutters came down to shouts of “Fire!” and “Evacuate the station!”

Traffic was at a standstill as two fire engines, their sirens blasting, edged their way past us to what we later discovered was a fire on one of the trains. We had no choice but to head for the Leicester Square Tube where a mass of sweaty bodies were also searching for alternative routes to the closed Piccadilly Line. After a tortuously long and airless journey I caught my train, with minutes to spare, in a disgusting state of overheating. [enough said!]

The next day the weather had cooled with cloud cover and a pleasant breeze. Yes, we were indeed mistresses of timing.

This was the best play I’ve seen in a long time. The main character, played by Lenny Henry, was angry and disappointed with what life had thrown at him in America’s South during the 1950s/60s. Overt racism was still evident in jobs, sport and all areas of life, even after integration, and many talented blacks never realised their potential. Henry’s character was superbly horrible taking out his frustrations and disappointments on all around him. More than once his wife, Tanya Moodie, had real tears coursing down her cheeks. [How does she do that once a day and twice on Thursdays?]

By the end of the production I had a lump of sobs lodged in the back of my throat. Was it because the play had been so good or had it touched me personally? I suspect it was both. I’ve never experienced the overt racism that formed the play’s central theme. My regrets are more personal. In my teens I thought I could do anything, change everything, make a mark on the world. Now I realise that I couldn’t, didn’t and won’t.

Do you have pangs of regret? Or is it just me?