A School Topic on Richard III

Yesterday I got a message via The Children's Book of Richard III's Facebook page from a teacher. She wanted to buy one of my books. I was delighted to hear from her. She's a local teacher and her class is doing a topic on Richard III. I have offered to visit her school. I told her that I don't charge for school visits. All I ask is for the school and/or its pupils to buy a few books from me to cover my costs.

The teacher told me in her message that a well known online book-selling website says there are no books available, only second-hand ones. They are wrong. There are books available. This is not the first time this has happened. So I shall endeavour to circumnavigate that well known site and let you all know that we have books available at The Reading Shop. If you click on the link you can buy a book and it will be sent to you by the very same person who would have packed and posted it to you had you gone to that other site.


This blog post is also a reminder that I am still available to give talks in schools
in return for a few book purchases. This is me in action: 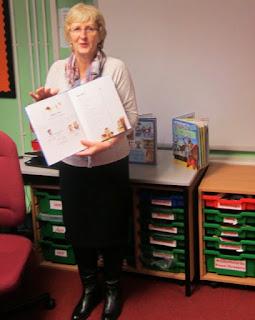 On this day, 3rd February in 1399, John of Gaunt died in Leicester Castle.

Five Facts about John of Gaunt

1.  Leicester Castle was his favourite residence and the place where he died.

2.  He was the son of Edward III, brother of the Black Prince, Uncle to Richard II and Father of Henry IV.

4.  He was not popular with the people and during the Peasants Revolt of 1381 they set fire to his London Savoy Palace residence.

5.  Just before his death his son, Henry Bolingbroke, was banished from the country and the trauma may have contributed to his death.

2.  The Great Hall, built some time in the1100s, had an impressive timber-beamed structure and was used until recently as Leicester's Crown Court.

4.  Gun holes, punched into the castle's walls during the Civil War when Parliamentarian Leicester was under siege, can still be seen today.

5.  John of Gaunt's cellar, a popular feature of the castle, is most likely the remains of an old stone kitchen.