A Day of Spontaneity

A quiet day in Peterborough, that was what I had planned for Daughter and myself. We would have a bite to eat in John Lewis, wander up to the Cathedral and then sip coffee in an as-yet-unidentified cafe. Even though Peterborough is equidistance between us, this was the first time we had arranged to meet there. It was what we both needed on one of Daughter's rare work breaks - a nice quiet day.

I was about to leave the house when she rang. The Peterborough train has been cancelled. Let's meet in London and have lunch at Ottolenghi's... and so began a manic but marvellous meet-up. 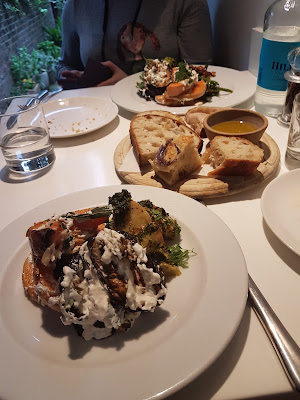 Ottolenghi's is in Islington, a typical Israeli relaxed kind of place with long white tables and lots of chatter. We each had a plate piled high with rich and varied salads. As our food was placed before us, I couldn't help thinking that salads never looked like this when I was young.

We sat for hours putting the world to rights and then we wandered off to Angel Islington and the boutique shops. I fell in love with a handbag and, as this was a day of spontaneity, I bought it. We wandered on past a nail bar... well not exactly past. We went into the nail bar and minutes later we were sitting side-by-side having our hands massaged and our nails painted. I went for glittery pink. Daughter chose blue.

In the next street we found one of those cafés where people sit with laptops or lounge on settees and we put yet more of the world to rights over an afternoon cuppa by which time it was no longer afternoon. It was six o'clock and time to return to St Pancras Railway Station.

Just time for a final hug and a wave and the day was over. What a treat, and all the more enjoyable for being so spontaneous.

On Being a Pet Owner

It has been a difficult few weeks for a number of reasons. One of them is cat related. Our little old cat, Charlie, had to be taken for her last visit to the vets on Monday. She had been a poorly cat for some time so this was not a sudden thing but that doesn't mean it hurts any less. Now her sister, Mabel, keeps sitting in the hall crying and wandering round sniffing the carpet. How do you tell a cat that her lifelong companion has gone?

And so I'm trying to write, trying to take my mind off the pains and vagaries of life but, at the moment, I can only think of cat related things to write about and so...

I have had cats all my life. There was a tabby cat called Timothy, a fluffy one called Paddy Paws and my first cat when I got married, a ginger tom called Tinker, aptly named. He would leap from behind and attach himself to unsuspecting visitors' backs.

Plink and Plonk, (I know, I know, they were named by my ex-husband!) were two little brother cats who supported me through a difficult divorce. They moved house with me when I had to downsize twice over and then, when I met Mr A, they had to tolerate the addition of Ben the dog into their lives. I was concerned for their safety as Ben fancied himself as a bit of a cat chaser. We kept them in separate parts of the house for a few days but we knew we had to introduce them. (I have mentioned this once before here on my blog but I think it bears a second telling.) One evening Mr A put Ben on the lead and brought him into the back room where the cats were. Ben pulled and strained on his lead whining, "Let me get at them, let me get at them." I told Mr A to unfasten the lead and I got ready to rescue the cats, but as soon as Ben realised he was no longer safely on the lead he hid behind Mr A's legs and shook. For weeks the cats sat on the dining table taking unprovoked swipes at Ben's muzzle.

Plink and Plonk never truly warmed to Ben but after their demise our little tortoiseshell darling cat, Rosie, fell in love with him, so much so that when Ben died, Rosie pined and we got another rescue dog, the manic and very adorable Josh. Losing Josh hurt so badly I thought I'd never have a pet again. It was Mum who suggested that my home wasn't a home without pets. She was right... of course. Mums are always right. Charlie and Mabel, two sister cats, came from the RSPCA where nothing was known about them except that an elderly lady had owned them. They were traumatised and timid when they arrived but I like to think they've had (and in Mabel's case is continuing to have) a good life here with us which is the most important thing.

And now I shall go back to giving Mabel extra fuss and attention because she deserves it. 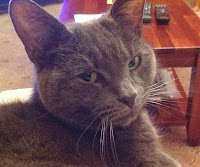