Me and Distance Driving…

I have been driving for over 50 years (yes, I'm that old!). This means that I’ve had more than enough time to hone the craft and I am fine around town but distance driving has never been my strength. Last weekend I visited family in North Manchester. I’ve done it before but will I ever be brave enough to do it again? It was so traumatic that I need to share the experience, by way of therapy. Please don’t feel obliged to read to the end. This one’s for me!

The Journey there: I thought I’d try a different route, avoid the dreaded M6, so I went up the M1 and over the top of Sheffield. That’s a pretty road, especially where it crosses the Pennines. I even pulled over on a lay-by for a few minutes to admire the view. I wouldn’t have done that if I’d known what was round the next corner. I’d never heard of the village Tintwhistle before. I have now. I spent almost an hour crawling towards Tintwhistle and then through Tintwhistle and then out the other side of Tintwhistle.

The Journey home: I was resigned to taking the dreaded M6 route but thankfully the motorway was clear… clear for the M6, that is. I transferred from M6 to A500 feeling smug until I reached the A50. There is a large roundabout on that road with signs saying how many lorries have overturned there during the year. That weekend I don’t suppose any lorries were about to overturn because the road beyond was shut, barred with red and white striped barriers.

Any seasoned traveller would have stopped and reassessed. I panicked. I went round the roundabout and drove back the way I had come. I had crazy thoughts of driving back to Manchester but knew that wasn’t an option. I drove all the way back to the M6. I drove South to the A5. I drove through a place called Cannock. I drove through numerous other places that I had never been to before. I was gripping the steering wheel, ‘rabbit in headlights’ mode. I should have stopped. Why didn’t I stop? I drove on for four hours. When I got home I sat on the settee with a substantial whisky and didn’t move for several hours. That night I had flashbacks of red and white striped barriers. Pathetic but true.

Thank you for allowing me to off-load.

"Get away from the human!"

"Avoid the cat at all costs!"

but the fledgling didn't understand or maybe it was going through that teenage stage of thinking that it knew best.

By now Charlie's taste buds had been whetted. Cats will be cats, I'm afraid. She went into hunting mode, started to creep across the path towards the fledgling but the parents were having none of it. They went for Charlie, pecking at her head and neck. Charlie, who is not as young as she used to be and is now rather small and skinny, fled to a safe place under an acer bush but the blackbirds continued their screaming until I ran out, scooped Charlie up and brought her into the house.

Mummy and daddy blackbird are now sitting in strategic positions calling to the fledgling. I hope it makes it. It doesn't deserve to end up in Charlie's mouth. So far, so good. Charlie has fallen asleep in the house and the blackbirds are still busy outside.

This photo of mummy blackbird on the corner of the shed roof is blurred. It was taken from a distance. I decided that the birds had had enough trauma for one morning. 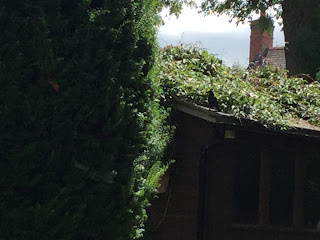