Not Yet Autumn in Our Garden

After a couple of hot months, this cooler weather has fooled some of us into thinking that it's Autumn, but Summer is not quite over yet, not in our garden anyway. I love this rose: 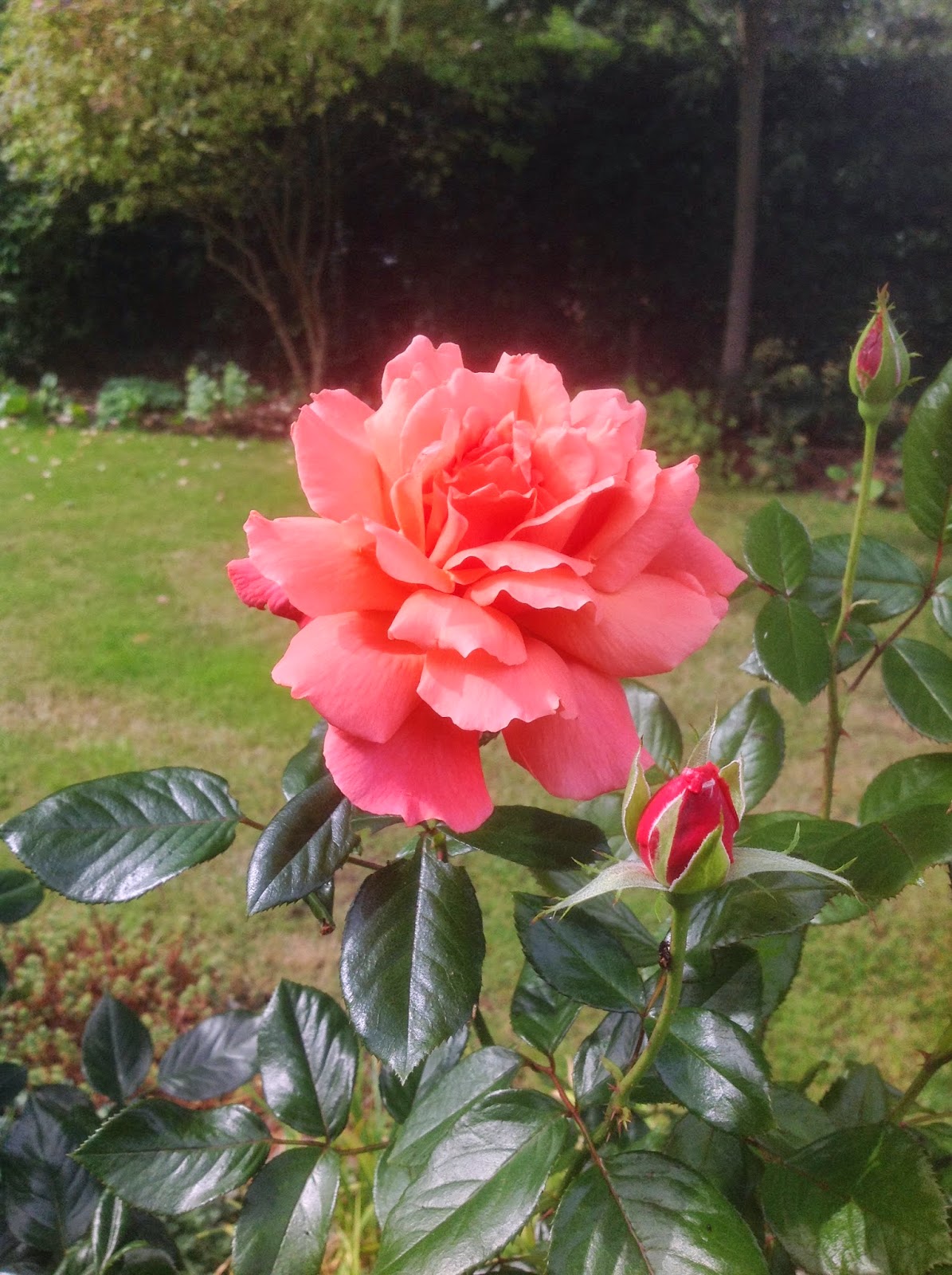 And these two-tone gladioli are amazing: 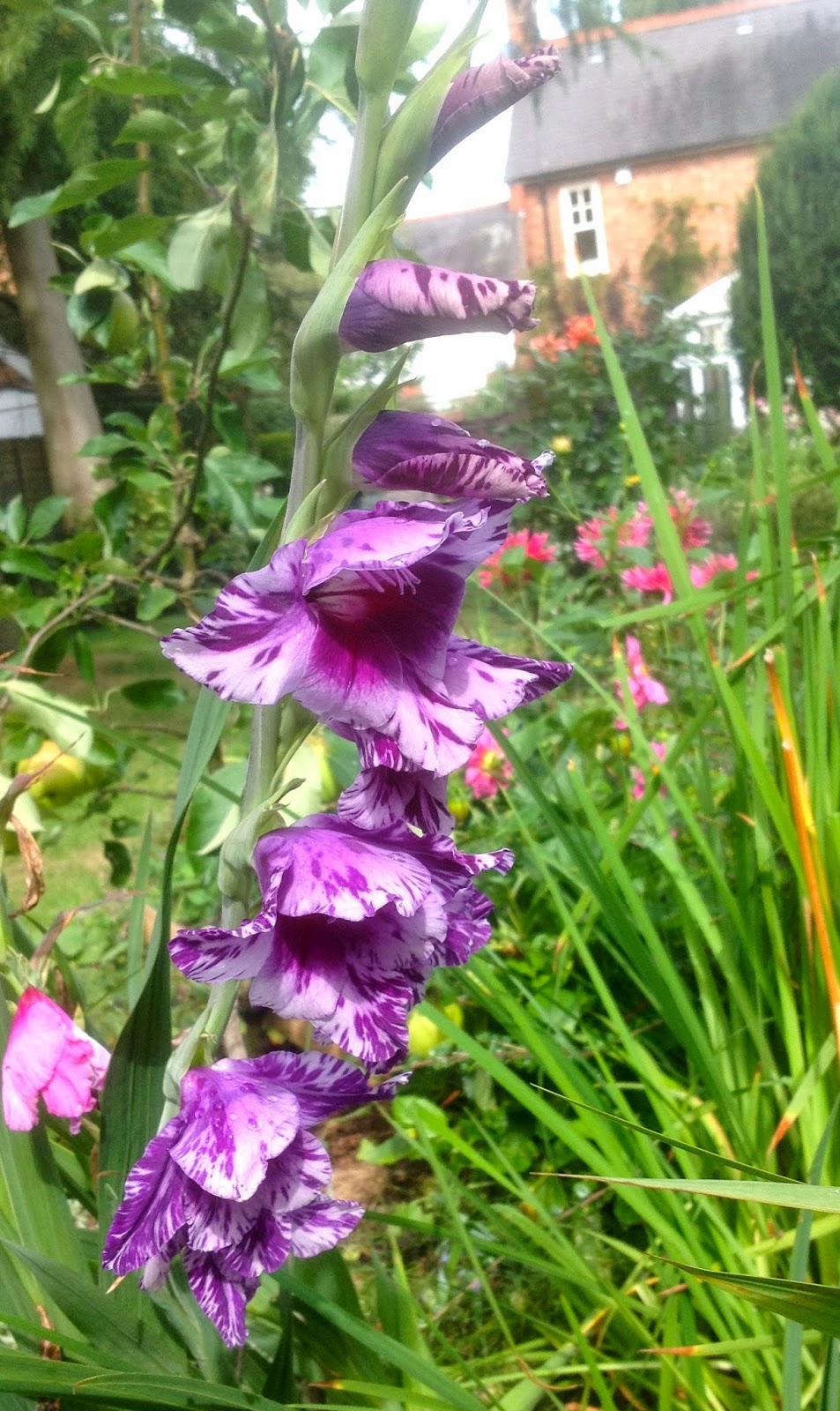 The tomatoes in Mr A's greenhouse will be ripening for another month or so yet: 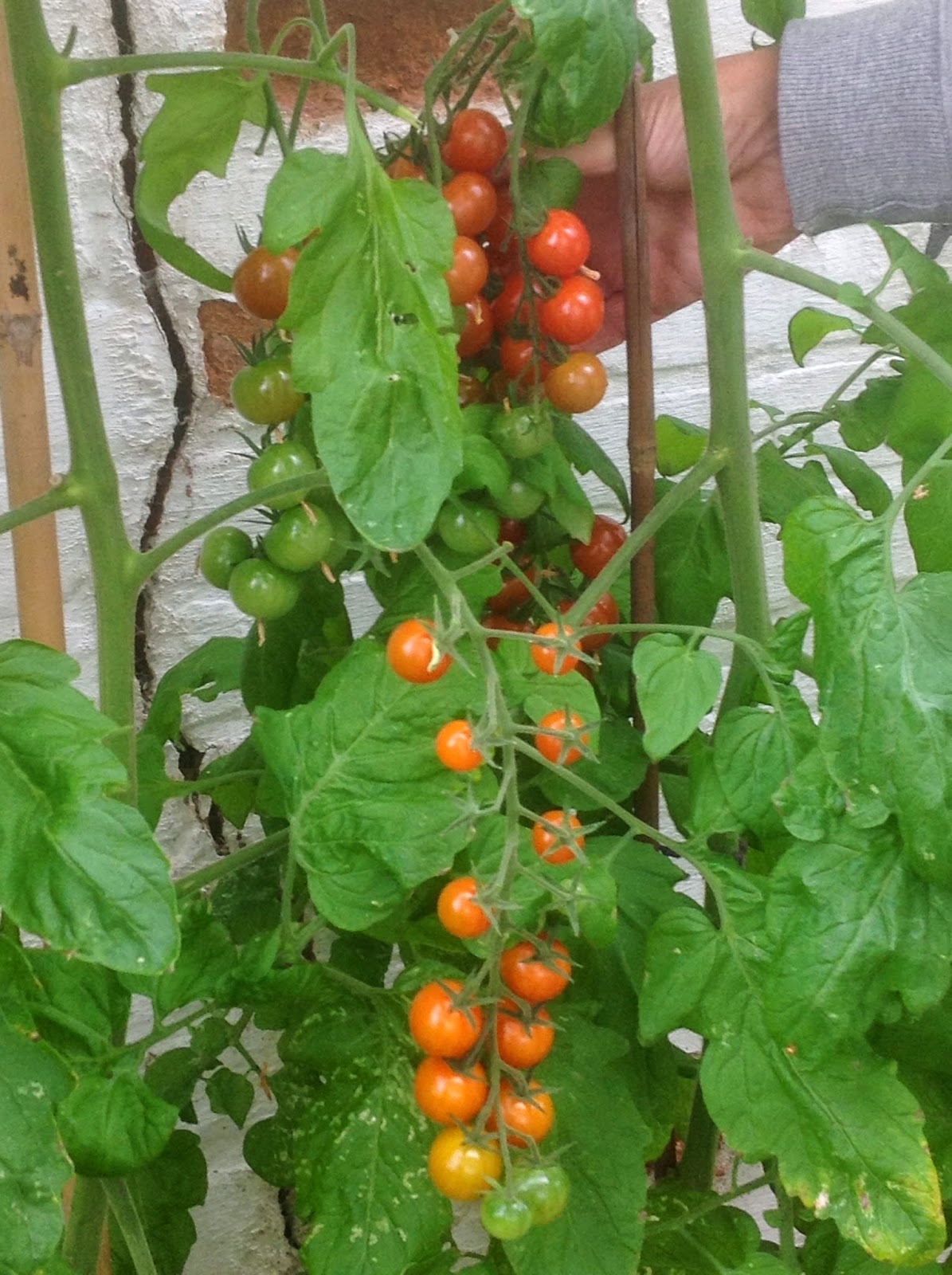 We're already getting a steady supply of them, plus a few raspberries which you can see tucked into the front of the bowl: 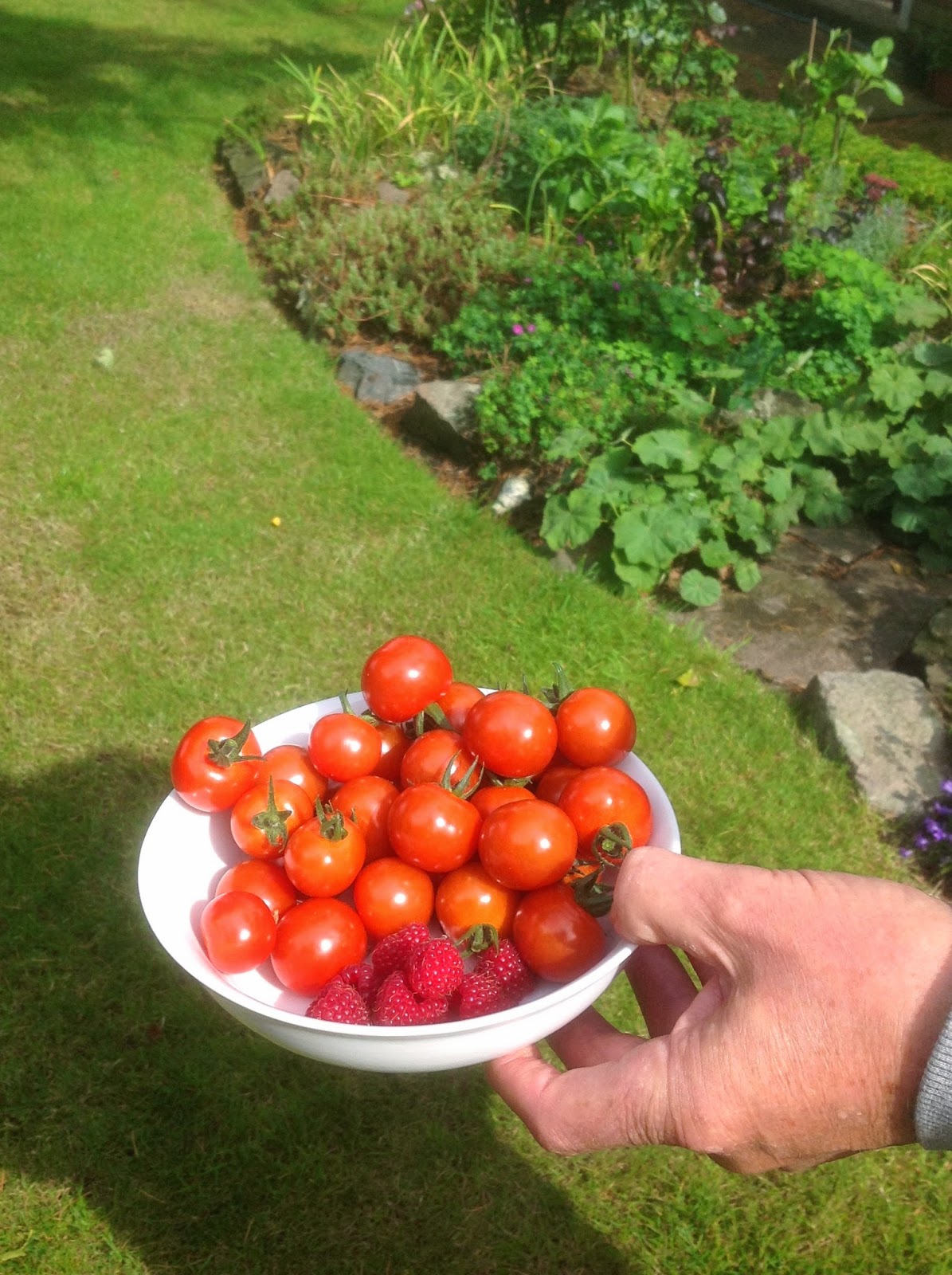 And there's enough root vegetables to keep us well fed: 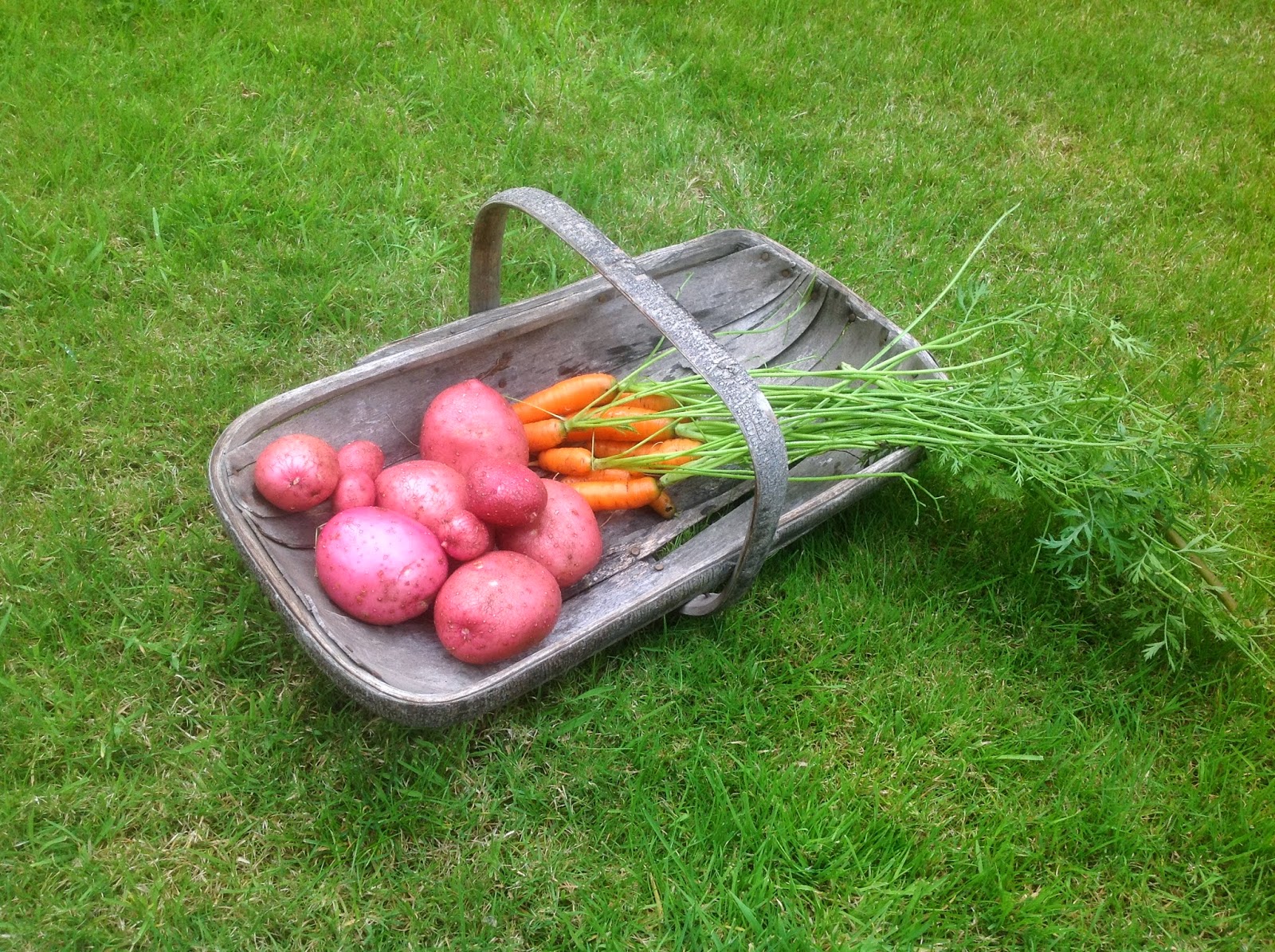 You can't beat 'growing your own'. If I had to choose my favourite crop it would be peas. I love them so much that they rarely make the journey from the garden into the kitchen intact! What's your favourite crop?

We've just spent a bit of quality time with our amazing grandkids. I have to admit that I am now exhausted but it was lovely to see them and I've gathered up lots of happy memories while we were there. We saw monkeys in the monkey forest playing and chasing each other. We played on the swings in the local park and I plucked up the courage to swing high, like when I was a kid. Then there were the stories that we read together and the games that we created whilst crawling on the floor. The best memories are the hugs and kisses and the words, "I love you, Grandma Ros and Grandpa Rod".

Those happy memories will keep me going for a little while until we can meet up again. (Why can't families all live round the corner from each other like in the olden days or am I wearing those tinted specs again?) But I came away from our visit with more than happy memories. I came away with a wise piece of advice from my son. (Don't you love it when your kids become wiser than you?!) On our last evening there he put little grandson to bed and came down saying, "I always like to leave him with a happy thought to take with him as he goes off to sleep. Tonight he chose the baby monkeys playing in the forest." 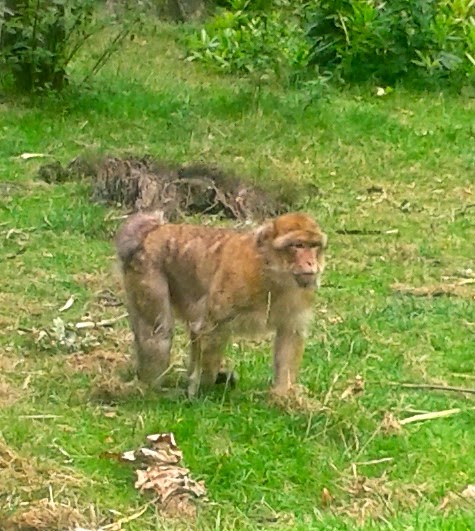 A lot of life is about what's in our heads, isn't it. We can think about something lovely and smile or we can think about something awful and grimace. It sounds like an obvious choice and if it was as easy as that then we'd all spend all our time thinking lovely thoughts. For me the hardest times are those hours in the middle of the night, but maybe I can turn that around if I listen to my son's advice and take a happy thought with me when I go to sleep. (If you're reading this, Son, and I know that you often do, then thanks. I'll certainly give it a go.)

Daughter update: I'm so pleased to report that my daughter is recovering well following major surgery earlier in the summer. She's hoping to get back to work after the Bank Holiday week. Thanks to everyone who sent her get well wishes.

Children's Book of Richard III update: We have almost sold out of the first print run. Because there were one or two small changes required, this next print run has become a 2nd edition. Apologies if you wanted to order a copy this week. The 2nd edition will be available either online or in person from The Reading Shop in about two weeks' time.

Our writing workshop met this morning and I suggested we do a writing exercise before getting on with our critiquing. I chose an exercise from one of my favourite and well-used books, Writing Down the Bones by Natalie Goldberg. She recommends a short session (we did five minutes) of brainstorm/freeflow writing followed by a further session to edit some or all of the material produced and then to share the pieces out loud.

I had chosen food for our writing exercise, anything to do with food. I guessed that each of us would produce something totally different and I was right. We heard about the bulk cooking of pizzas for a family gathering and the way that food can touch the memory like no other sensation can. We were taken into a French kitchen with its rich atmosphere and pungent aromas. We mused at the way in which a trip to the market to buy cherries turned into memories of an aunt and her hat-purchasing fetish and we had a mouthwatering account of all the foods that we have, over the years, brought along to our monthly lunch gatherings. (Yes, we are ladies who lunch as well as ladies who write!)

Although most of us are fiction writers, every piece of writing was based on true events, most of them long-ago memories. This was also true of the piece I'd written, except it isn't a long ago memory. It happened yesterday. I wrote it in short poetry-style lines. It's not meant to read as a poem. It was just the way it fell from my pen:

We called at the bakers.
They only had cheese straws.
We popped into the deli
But baclava doesn't do it for me.
We had soup for lunch instead
and I disappeared off to write,
trying to ignore the noises from the kitchen.
Clunk, whir, click.

Teatime.
He brought me a steaming mug of tea
and a plate of tiny, round,
perfectly formed,
cheese scones.
They dissolved on my tongue.
From a man of few words
They spoke a million.

It's been a long and hard year of work but the task to catalogue our old and crumbling cemetery is nearing completion. For those of you who have expressed an interest in the project, please visit the official Project Website at Jewish-Gilroes It helps to explain why I've not been around much on the Bloggersphere recently. 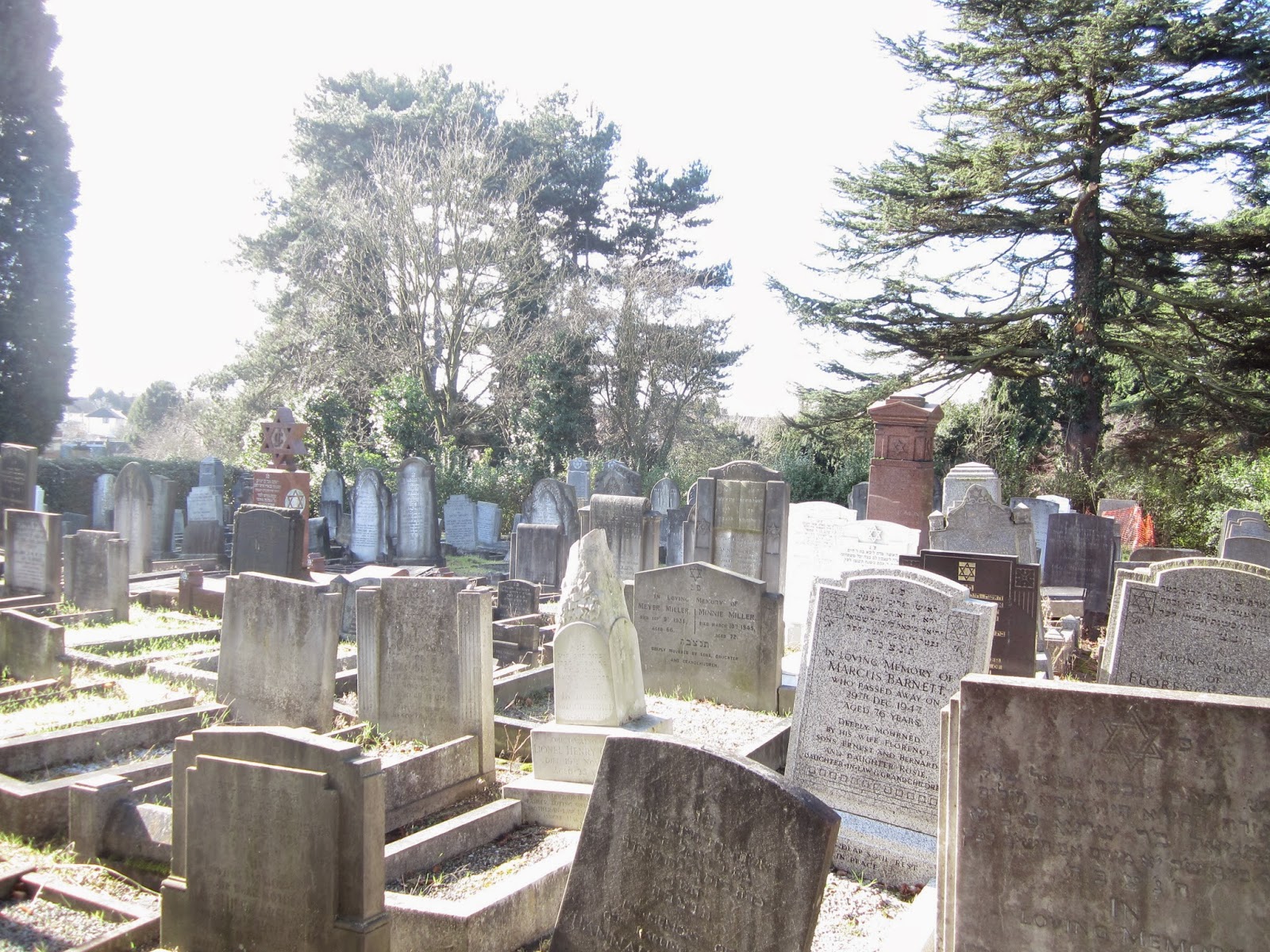 Nothing lasts forever. This photograph shows some of the older stones as they were last year. Sadly, since then, even more stones in this part of the cemetery have become unsafe. Every time we go to the cemetery we see that the Council have erected more and more orange netting. It surrounds the dangerous stones; the ones that are crumbling or have succumbed to subsidence.

I know that even the Internet and Websites don't last forever but I hope that we've preserved something; the images of the graves, information about the people buried there. It's all on the Website for future generations.

This has been a really worthwhile project and I'm extremely grateful to the Heritage Lottery Fund for all their support but I can't wait to get back to writing something frivolous, something purely fictional. I think I can feel one of my ditty-style poems coming on!