New Cats
Last week we adopted two cats. Our old cat, Mabel, died last December and it's been very quiet here. It's not quiet anymore! According to their chips they are both seven years old. Their owner was an elderly man who died so we don't know anything else. It's early days for them - not allowed out - two litter trays - constant whiff in the air. It's a good job we're still not having house guests!
Sophie has discovered the joys of the settee but Betty is obsessively staying within a few feet of her food and, in the words of Desperate Dan, she could eat a cow pie... the whole time: 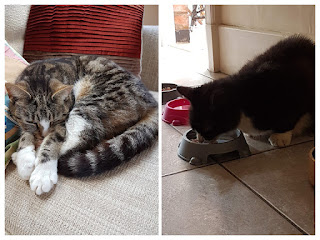 First Hugs
On Sunday we did something that we hadn't done since December 2019. We met up with Son and family. I have to admit that there were tears. We met at a halfway point, Cromford Mills in Derbyshire. It's a fascinating historic site where Richard Arkwright developed his idea for spinning cotton using the power of water but we were almost too busy catching up on chatter and hugs to take it all in. It was a very special day, it was beyond lovely and I never want to go that long again without seeing them.
My Struggle
I don't often talk about my health on this blog but it was mental health awareness week recently so maybe it's right to say something especially as a lot of people who know me outside this blog think I'm totally self-assured and 'together'.
As a teenager I suffered from bouts of agoraphobia. It has never completely left me. I'm always aware of the struggle to keep it from taking over BUT I always manage to get out and do the things that I want to do. I force myself. It's hard work but preferable to hiding away. I've tried all manner of counselling and hypnotherapy but it's always there - always.
Lockdown was a safe place to be which means that now, after over a year of hardly leaving the house, I am finding it seriously difficult. My stomach churns and my legs tremble at the smallest of outings. Yes, I managed to get to Derbyshire on Sunday and I will continue to get myself to places but my body is constantly in full fight/flight mode and it is exhausting.
Sorry to moan and thank you for letting me share that.
Posted by Rosalind Adam at 11:14

Have I invented a new word?

I think I may have invented a new word but if you've seen it used elsewhere then do let me know. This all came about because I keep referring to things that happened, 'before the pandemic'. It made me think of the word 'antediluvian' - 'before the flood' - and so I decided that the word 'antecovidian' would be extremely useful over the next year or so.

Now I shall use my new word...

I used to have a rail card for antecovidian train travel. I was about to use it to go to London when the first lockdown hit. The rail card has now expired and although I'm not planning to go anywhere by train at the moment, (there seems to be a major problem with our trains, something to do with cracks in carriages) I was hoping to use the train some time during the summer. It would seem that, although we were told by the government not to travel, there will be no carrying-over of rail cards to compensate.

This is not a major issue, it's not life or death, but it is yet another thing that makes me feel dissatisfied as I try to come to terms with our strange face-masking, hand-gelling world.

And now I shall use my new word again...

Antecovidian appointments with the GP almost always involved going to the surgery, sitting with other ill people in the waiting room, catching goodness-only-knows-what from them before being called in to see the doctor. This was an experience that I always dreaded.

Now the system has changed. Consultations take place over the phone or on video call if the GP needs to look at a particular part of you. For many things this is good but they say that a lot of serious conditions are being missed. They also say (not sure exactly who 'they' are!) that there are not enough GPs to see all their patients in person any more. I'm not suggesting GP practices return to antecovidian days but surely there must be a compromise to be reached.

I shall now sit back and see if my new word can find its way into regular parlance. What fun!!

Thank you to The Copperfield Review for publishing my poem...

This has spurred me on to spend a bit more time on my poetry. I've visited blogs where people list poetry publishers who are calling for submissions, scoured Twitter and Facebook and spent some considerable time on Google. I now have a list that's so long it's almost unmanageable. It would seem that there are seventy poetry magazines, some online and some in print, who accept submissions. Some offer payments, some offer a free magazine if you get published, others offer nothing other than the kudos. Some have specific submission windows, others accept work 24/7. None of the seventy require payment to read my work. I deleted all of those.

I have all seventy names and their specific requirements in a spreadsheet - how organised am I!?! I also have a file full of work-in-progress poetry and I'm working my way through the two lists to try and match poems with magazines. A lot of my writing draws on history and there is, as you can see at the top of this post, a market for this. 'Dancing across canvas' is the second of my poems to be accepted by a historical literary journal called The Copperfield Review. You can read it here: Dancing across canvas

I know, I know, I've posted the link twice. It only seems fair to give the site a double promo!

Several days ago I had settled down to write a post about happiness. I'd been listening to a radio programme that discussed the power of our minds and the way we have the choice to think happy thoughts rather than sad or anxious ones.

As you can see, that post never materialised. I was thrown into a panic of negativity that began with this blog. Everything I typed showed up in machine code. It was baffling until some Twitter and blog friends came to my rescue - with special thanks to Joanne Faries of Word Splash who I messaged but forgot about the time difference! (Hope I didn't wake you up, Joanne.) There is a button top left that restored my screen and my sanity - well not quite my sanity because my blog was, as it turned out, the least of my worries.

I settled onto the sofa to start my blog post once more when a mouse ran across the floor and into the corner behind the TV. I've had cats all my life until my lovely little Mabel died last December. I still miss her very much but I never appreciated her mousing skills until now. I managed more by luck than skill to usher the mouse into the kitchen and out through the open door to the back garden. Goodbye mousey!

We searched for signs of mouse habitation and found, under the kitchen sink, mouse droppings, piles of them. We set to removing the bottles of cleaning fluid that we keep there but the mouse had nibbled corners. Liquids of all colour and smell poured out down our clothes, over our shoes and across the kitchen floor. After considerable cleaning, order was restored and that was that - or so we thought.

Yesterday morning I was walking into the kitchen when I almost tripped over a cheeky mouse scuttling across the floor. I grabbed a towel (if you throw a towel over them they stop running) but the mouse was considerably faster than me and it slid behind the fridge/freezer. It took nigh on an hour to move the fridge/freezer out far enough so that I could scoop the mouse up in the towel and release it into the garden. That release was quite a moving moment. I opened my hands and it looked up at me. 'What? You mean I'm free to go?' it seemed to say. 'Yes,' I said. 'Go on. Run.' And it did - they would be quite cute if they weren't vermin.

We doubted that there would be any other mice in the house but just in case we went out and bought two humane mouse catchers. You put food in them and when the mouse goes in to get the food the lid drops down and you can carry them out and set them free. I baited them and set them up in the kitchen for the evening. At bedtime the lids were still propped open but - I did say they were cheeky - the food was gone.

It looks as if we will be getting another cat. Well, as I said, I've always had cats, always rescue cats, and I do miss having a cat around. I've already contacted some local catteries so watch this space.