So many red flowers in the garden this month. They seem to be reflecting my mood, lazy and languid. Only the bee in the bottom photo is doing any work: 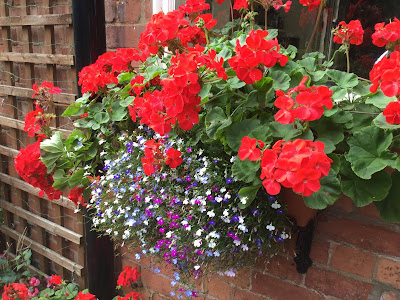 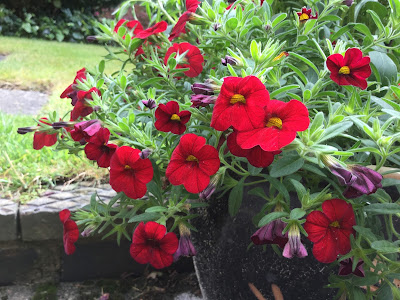 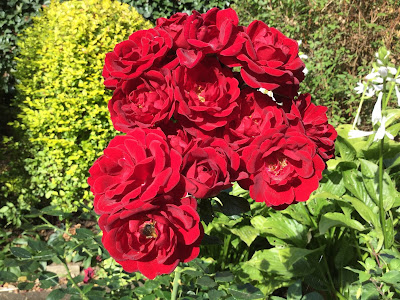 Hope you're having a great August holiday time. September will be the start of a fresh academic year and a new adventure for me, but I'll talk more about that next month...

On this day, 12th August, in 1848 George Stephenson died. He not only built the first public inter-city railway line, he planned and managed the building of Leicestershire's first railway line too. When he was planning the construction work he met with engineers and financiers at Leicester's Bell Hotel. The Bell is no longer standing but I still have fond memories of the hotel and, although I am sure that I could have written copious words in memory of George Stephenson, I have decided to write a tribute to The Bell Hotel instead.

The Bell Hotel was Leicester’s most respectable coaching inn in the days when horse power really meant horse power. Built around 1700, it was well patronised by all the county families and was said to be cutting edge in comfort. The Bell was favoured by the hunting gentry on their way to the Quorn and, as I mentioned above, it was the place where George Stephenson met with engineers and financiers to plan Leicestershire’s first railway, the Leicester to Swannington line. The hotel was an important part of upper class Leicester life. 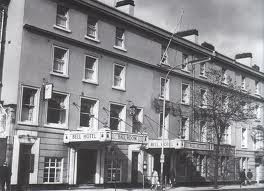 Time passed and tramlines were laid into the cobbled roadway running past the hotel, adding new sounds to the strike of horses hooves. The Bell was modernised, with electric lighting and a garage for those ‘new fangled motor vehicles’.

Yet more time passed. They tarmacked over the cobbles, over the tramlines and maroon Corporation buses took the place of the horse and carriage. The Bell was still popular, still buzzing with lively dinner dances, parties and weddings, but by 1970 it was starting to look shabby and Leicester, it would seem, needed a shopping mall. The Council ignored the objections, the placards, the protests printed on the Leicester Mercury letters’ page. The bulldozers were sent in to do their damnedest and a red brick shopping centre emerged from the 18th century dust. They used an ancient name. They called it the Haymarket, as if this might placate the objectors. It didn’t.

Now, stone paving slabs have replaced the tarmac roadway. Humberstone Gate has been pedestrianised, with a big screen for special sporting occasions, a roundabout for the kids and an ice rink that appears each Christmas time. It seems strange that a coaching inn once stood on a site where traffic is no longer allowed and it’s sad that all traces of The Bell Hotel have gone, so I thought I’d write this to try and keep its memory alive.