An Elephant in Town

The other day I popped into town to buy a few bits and pieces. My first stop was Boots on Leicester's busy Gallowtree Gate but as I approached the store I couldn't help noticing an elephant moving along majestically. It's trunk was swinging and its body swaying as it glided towards me. 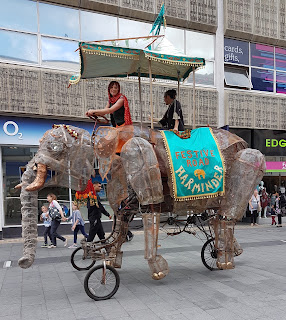 Ok, so it wasn't a real elephant but it made me stop and smile. I was intrigued. I was attracted by the sound of Indian music. My purchases from Boots would have to wait. At the Clock Tower a troupe of acrobatic dancers were flipping and flying through the air. Their movements were accomplished. The music was rousing. I stood on tiptoes to see over the heads of the crowd. The atmosphere was good. Everyone was smiling and clapping.

A stage on Humberstone Gate was attracting another crowd. I made my way past the Haymarket and watched as dancers moved their arms, telling stories with their hands. Then the presenter introduced the next act shown in the picture below. He was a singer whose voice was clear and beautiful, leaping up and down the scales in a hypnotic way. 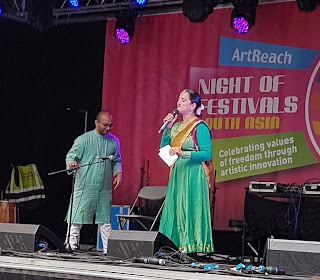 I turned back towards the Clock Tower. Now there were youngsters dancing. They were throwing coloured powder into the air. The wind caught the powder and the crowd became speckled with blue and red. I laughed, cleaned my glasses with a tissue and moved on. In the newly created Market Square there were drummers. I stood and watched, feeling each drumbeat vibrating in the air.

As I returned along Granby Street I was offered Masala tea which was rich and spicy. The first sip caught my throat. The man who had served me smiled. Would I rather have orange juice, he asked, but I persisted and I'm glad I did. The tea gave me a warm glow. I may go and buy some to make at home but I suspect it would never taste as good as it did that afternoon from a paper beaker in the middle of town.


These events were part of Leicester's Night of Festivals to celebrate the spirit of South Asia and mark the 70th anniversary of Pakistan and Indian independence.