Now I know I'm getting old.

It's not because of the flabby bat-wing skin on my arms or the way I sometimes doze off in the afternoon. It's because a pharmacist in a large outlet of a well-known chemist refused to sell me a self-testing UTI kit and his reason: "I'm sorry, Madam, but you're too old."

Too old to test my own urine! Does he think that I'll fall and hurt myself when assuming the position or that I'll miss the bottle, wee on the floor and slip on all the vast amounts of liquid? As you can guess, I was incensed.

The reason for wanting to buy my own testing kit was that the GPs are reluctant to test for UTIs since Covid. However, after much persuasion I was tested, have almost finished the course of antibiotics and am feeling much better, thank you for asking.

This was my first experience of ageism - not so with sexism. I grew up long before the #metoo culture. I hope this movement has improved life for women but sexism was a part of our lives back in the day, especially at work. One incident of many sticks out in my memory. I was a teacher governor and the only woman on the Board of Governors. During one meeting the Head told me to go and make the tea for everyone. I lowered my voice and muttered in his ear, "Go and make it yourself." He did. It was a bit of a risk job-wise but what a cheek!

As I say, I hope society has moved on since those days. I have noticed that recently, when I park a car, men no longer say, "Well done!" I am a driver. It's what drivers do and I have been driving for a scarily long time - 54 years. Which brings me back to ageism. I have not been on public transport since before Covid but I suspect when I start using buses again I will now be offered a seat by some young and sickeningly energetic person. I will, of course, accept the seat offer graciously but that 'young girl' inside me will balk, just momentarily, and then I'll sit down with the obligatory exclamation of, "Ooof" and gratefully take the weight off my poor old aching feet.

We can't fight the ageing process and I am trying to grow old gracefully, I'm not yet wearing purple with hats that don't go, but I am still at a loss to understand why a retail pharmacist refused to sell me a UTI testing kit because of my age.

Goodbye Sweden, the alien game and a bit of mindfulness

Well, that was decisive. In my previous blog post I wondered why my blog was receiving thousands of visits from Sweden. Within two days of posting it the visits started to tail off and have now stopped completely. My stats are back to their normal level with not a single visit from Sweden over the last seven days.

I had been wondering if these visits were some kind of automated bot that was not actually registering the contents of my posts but now I've changed my mind. Someone, somewhere in Sweden has been viewing my blog... viewing it thousands of times a week!! They have obviously now seen that on 1st August I called my post 'Hello Sweden' and talked about them. Apologies to Mr/s Swedish Blog Post Viewer if I have shocked you into going away but you have to agree that your vast number of visits were a bit strange. 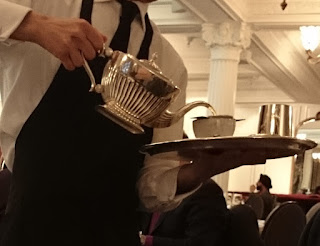 The Alien Game
Mind you, this is a very strange world. When we were kids we used to play the game of pretending we'd been visited by aliens. We took it in turns to explain something that we perceived as normal like making a cup of tea. Did everyone play that game or was it just me and my group of friends? We'd laugh at how the aliens would be shocked that we were heating H2O up until it turned into a gas, mixing it with tannin-enriched dried leaves and adding the juice from a cow's udder. The game would keep us amused for hours.
This image is a small section of a photo I took when Daughter treated us to afternoon tea in a posh London location.

Aliens would consider most of what we do to be extremely strange - sometimes so do I, especially if I stop my daily busy-ness and make a conscious decision to look, listen and notice things around me. I'm doing a mindfulness course at the moment and this includes mindful walking. How many times do we walk to arrive? Sometimes it's better to slow down, think about the movement of your body as you walk, be aware of details around you including smells and sounds. It's different - relaxing and satisfying, especially when you notice something that has always been there but you hadn't noticed it before or you look at it in a different way. I really am trying very hard to slow down and notice what I'm doing rather than always working in autopilot mode. A note for those who know me in real life - if you see me reverting to my old autopilot ways then you have my permission to give me a prod (but only a gentle one!)

I don't think I know anyone in Sweden but if any Swedes are reading this then please say hello back because you've been visiting my blog an awful lot recently.

I realised something strange was happening to my blog stats a few months ago. They have soared from an average of 300 to 400 visits a week to around 4,000 visits. On closer examination I discovered that the exceptionally high numbers are coming from Sweden. But why is Sweden interested in my blog?

I spoke with my blogger friend Vallypee who blogs at Rivergirl. Val, like me, uses Blogger to support her blogs. We had a chat about it and she loaded up her blog stats to investigate. Sure enough, exactly the same thing was happening to her blog.

Here is a screen shot of the hits on my blog for the last 7 days: 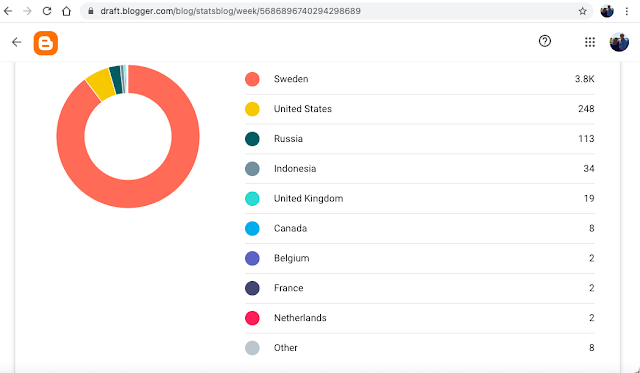 Val and myself noted that none of these additional viewers have opened any of our blog posts so were they scanning blog titles or was it some kind of bot? I'm very confused. What would a bot want with my blog? I rarely mention politics or religion and even when I do there's nothing there that could have a major effect on International relations, life and the universe so what on earth is the bot activity all about - or if it's people scanning my titles then what would be the purpose of doing that?

My stats figures may show Sweden as top but for quite some time Russia has been up there with the top countries to visit my blog. I might not know anyone from Sweden but I definitely don't know anyone from Russia. It's all very strange and, although it does me no harm whatsoever (well none that I know of!) if anyone reading this can throw some light on it for me then please do. I'm starting to get obsessed with my stats figures and that's never a good thing!