I've blogged quite a bit about how busy I've been this last term but I haven't once mentioned my bit of relaxation; my art class. I'm not an artist but I love going to the weekly art class in town. It means two hours of being totally absorbed in something that has nothing to do with the realities of life.

This term we've been trying out different techniques using acrylic paints. Dry brush was ok but my brush kept getting so dry that it wouldn't produce any marks at all and when I wet it just I ended up with huge splodges and a spoilt painting. Glazing was interesting but it involved painting lots of thin layers of paint and waiting for each one to dry which taxed my patience to the limit. My favourite technique so far has been using a palette knife. It's a bit like producing a roughly iced cake. The best part about it is being able to smear extra layers on top of each other if you make a mistake.

The following is the painting that I completed this week. I used acrylic paints, palette knife and a fine brush for the small details. I must stress again that I am not an artist. I'm very much a learner and this was painted in the easiest way possible, i.e. by copying a real artist's picture. This is much simpler than painting real life because someone else has converted the subject into a 2D image. 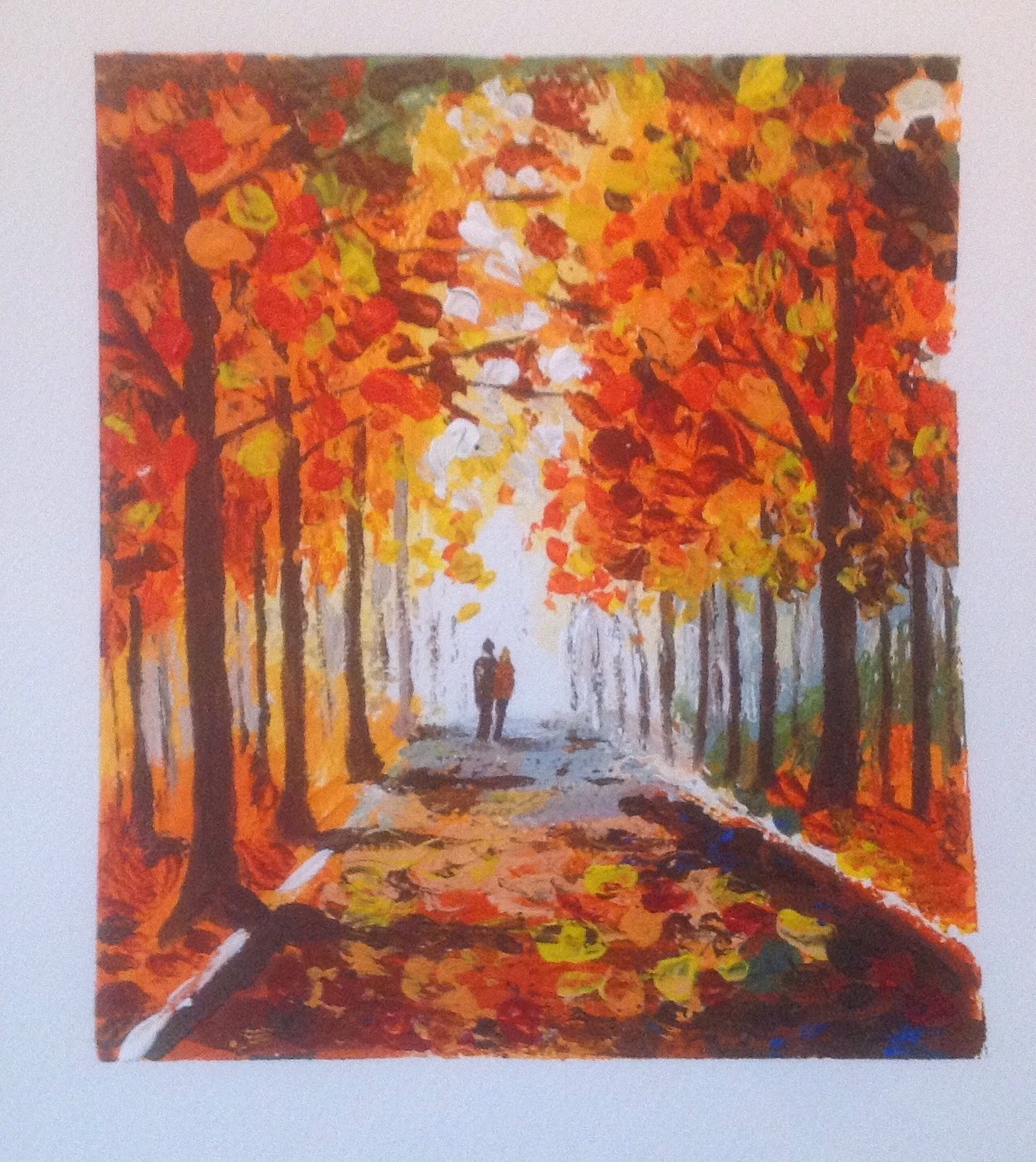 I've tried to find who painted the original picture. I think it is by Leonid Afremov. I can't find the exact one on Google but there's a similar picture called Fall Love, which translated into UK is Autumn Love. The name has a sad ring to it. I shall call my version Forever Springtime.

I love it when I can tick off lots of things on my To Do List. It's so satisfying. Over the last few weeks I've blogged about a number of current jobs and tasks and I'm pleased to say that this last week I've ticked off the following:

The thing about To Do Lists is that you've never completely done with them. There are always more tasks to add, more challenges to meet, but then life would be boring if our To Do Lists were empty... wouldn't it?

When Writing is Therapeutic

I love picking up a pencil and writing about nothing in particular. I never know what is about to emerge onto the paper. I only know that something always does. It's therapeutic. It's the kind of writing that is the absolute opposite of what I've been doing during this last year. My work cataloguing the local cemetery can't, by any stretch of the imagination, be called therapeutic. My parents and other family members are buried there, along with a number of dear friends. I've spent too much time immersed in grave stones. I need a break. I need to do some therapeutic creative writing.

I'm a member of Lapidus, The Writing for Wellbeing Organisation. The local East Midlands group fell into 'disrepair' several years ago so I decided that it was time to repair it. The first meeting of our newly formed East Midlands Lapidus Writing Group will take place this Friday 21st November in Leicester. If you live in the East Midlands and you'd like to join us then please get in touch with me or leave a message in the comments below and I'll get in touch with you.

Talking of comments, it is with some sadness and a lot of irritation that I've had to put comment moderation back onto my blog. Most people post comments that are helpful, friendly and relevant. Why do some people always spoil things? I'm receiving regular comments from people who want to sell me dubious items, want to offer me dubious jobs or - and these are the most confusing - comments that are nothing but a list of nonsensical words. Why would anyone waste their time writing that when they could be writing therapeutically instead?

If you're interested in therapeutic journal writing then I would recommend you visit Kate Thompson's blog called Therapeutic Journal Writing. It's packed with inspiring writing ideas.

Earlier this year I announced, with a certain amount of smugness, that I had joined a Caribbean Dance Class. I now have to admit that it only lasted three weeks – my attendance, that is, not the class. I believe there are still people dancing themselves to a standstill and I’m sure it’s doing them good but it was too much for my poor, unfit body. I returned to the comfort and safety of my computer chair… until a few weeks ago.

A few weeks ago, for the first time ever, my GP expressed concern about my blood pressure. He’s not overly concerned so thankfully I don’t have to take pills but he did ask me how many times a week I exercised. He wasn't impressed with my new yoga routine. "It has to be aerobic," he said. My blank stare of a reply told him all that he had, no doubt, expected and I was sent away with a warning to think about it seriously.

For the last few weeks I have been thinking about it seriously. That frenetic dance class wasn’t for me. I’m hopeless at running. My ankle swells when I walk too much (old squash injury but that’s another story!) The only activity left is swimming. I've decided to treat myself and join a club. That way I’m sure to go because I’ve paid money up front (Yes, I am that pathetic at keeping up exercise regimes!) So where to go?

There’s a lovely pool at my old Univerity five minutes drive away and I’m entitled to join because I’m an alumna but it's very expensive. There is also a pool that belongs to another Uni that I could join. It’s the other side of town, not too far away, and it’s a quarter the price but here’s my dilemma. I can swim perfectly well but I’m a wimp. I have to fight the panic if I go out of my depth.  The expensive pool has no deep end. The cheaper one does. On the other hand, they both offer aquarobics on a Friday morning which sounds like fun and I'm sure my GP would approve.

All I need to do now is to decide which one to join and yes, I know, I am prevaricating. I will get exercising again, really I will... just as soon as I've decided where to go!