The Dangers of Canal Boating

I’ve written a short piece about a canal boat holiday. It happened years ago, so long ago that the photographs below are stuck in an album and we look like youngsters.  The story is true… although I may have embroidered the middle bit just a little… but it really did happen.

We were enjoying our canal boat holiday in Norfolk. It’s a sedate way of travelling. Put on the kettle, wander along the towpath, gaze into the impenetrable brown. There’s no current to move boats along, only the steady chug of the engine, horse power but no longer literal. And then we saw the sign.
'Report to the lock keeper. You are about to enter a tidal river.'

We knew it was approaching. The Great Ouse. We’d been warned about it but the sun was shining, the lock keeper was cracking jokes. How bad could it be? I love rivers, all that rushing water, all that life. While waiting our turn we were given our instructions, 'Turn right. Head for the orange flag a few metres up river.' A few metres? No problem! 'Have your engine on full rev. You’ll need it,' he added.
The lock filled. The gates opened. Our metal boat was punched by a watery fist. Wind kicked its frame. Our engine roared. Spray slapped my face. The orange flag was a long way off. I turned to look back but all I could see was a blur of water. This river was predatory. I was gripping the side rail, trying to push away thoughts of my mourning family. Who would tell the kids? How would they manage? Then Mr A’s voice shook me back to reality. 'Get up here! Help me hold the tiller! We’re heading out to sea!'

Together we leant on the tiller then I lost my footing on the slimy metal deck. He reached out to help causing the boat made a violent lurch. 'I’m ok!' I yelled. 'Get the tiller!' Grabbing the rail, I hauled myself up. Water dripped from my clothes and hair, I squinted into the spray. 'The flag! Look!' I pointed. I’d never been so pleased to see an orange flag approach. Two men in life jackets were by the lock.

'Throw us your rope!' one called. I edged my way towards the bow, unhooked the hefty coil of rough, water-sodden rope and tried to swing it out to them. The rope landed with a thud on the water. I hauled it in. I tried a second, a third time. My hands hurt with the cold, the wet, the rope, the indignity.
'I can’t do it,' I sobbed.
'Come and take the rudder!' yelled Mr A. I edged back towards the stern but the wind was pushing me, pinning me against the boat and we were being buffeted away from the flag, towards the open sea once more. 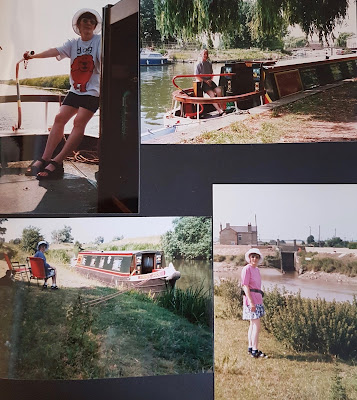 At that moment the boat listed to one side. If we took on water here we’d drown, I knew that. But then, just as it looked as if the water would flow over the side, a hand appeared on the rail followed by an orange-jacketed body and there, on the deck, stood one of the lock keepers. With an expertly aimed throw the rope was tossed to the shore and our boat was hauled away from the currents and into the lock.
On the other side we moored up, brewed up, changed into dry clothes and walked back to view the scene of our tidal terrors. We picked our way along a narrow path down to the very edge of the river. The sun glinted on each crest of each tiny wave. A fish, unidentifiable in the bright light, wove past us. There was a smell of salt, a tang of seaweed. I could feel the tension draining from my body. I do love rivers.

I've had a few requests from blogger friends to post up some of my poetry but once a poem has appeared on a blog it is considered to have been published and, as such, most poetry magazines would refuse to accept it. I am working towards producing a poetry collection and so it is important for me to have my work published by poetry magazines in order to get my name out there. Therefore I can't post up a selection of my poems at the moment. What I can do is to post the links to three poems that have been published so far this year...

I wrote Youth in response to a piece of artwork called Messiah by Ernst Neuschul. I am fascinated by this kind of writing. It's called ekphrastic writing and our tutor on the MA Course introduced me to it. He took us to New Walk Museum and told us to find a painting and see what writing it inspired. Youth was the first piece I wrote. I went on to write a number of other pieces but this one was accepted by the Ekphrastic Review last December and so you can read it here:

Having been inspired by art, I moved on to music. I love listening to Klezmer music, popular in 19th century Ashkenazi communities of Eastern Europe. Klezmer bands would roam from stetl to stetl often playing for very little money and a bed for the night. The music fell out of fashion after the Second World War but during the 1980s its popularity reemerged. Klezmer music makes me want to dance and so I wrote two poems about men playing and dancing to the music. They were both published in last month's Jewish Literary Review. You can read them here:

...and a tiff with the local press

Last week our local newspaper, The Leicester Mercury, said that they couldn't send a reporter to the annual HMD Event and so the event organiser asked if I would write a report. I interviewed participants, wrote out the article and submitted it early next morning.

The following day it appeared in the local newspaper - that is to say, all my words appeared, but they were accredited to someone called Staff Reporter. When I queried this, they said they thought I was sending in a press release... No, it made no sense as an excuse to me either.

I have decided to post the article here, so that my name can be firmly attached to my words, because I did indeed write them. The only alteration I've made is to remove the names of the school children - something that is welcomed in the world of local newspapers, but not necessarily on a public blog.

On Sunday, 27th January, 2019, it was standing room only for the 19th Holocaust Memorial Day Event. The audience at the University of Leicester’s Fraser Noble Hall experienced a rollercoaster of emotions.

Four eloquent students opened the evening with a passionate desire to see their generation make a difference. The first two students recounted their visit to Auschwitz. They were particularly moved by the room of personal possessions, by the bags, shoes and glasses, and were saddened that there is still ethnic cleansing today. The second two students spoke of their trip to the First World War battlefields. They hoped that by raising awareness of past horrors it might prevent them from reoccurring and concluded by quoting Anne Frank:


‘I still believe people are really good at heart.’

Tony Nelson, who was chairing the event, said that these youngsters give us hope for the future.

After listening to haunting flute music from two young musicians, Dr Tom Wilson talked of his sobering experience visiting Srebrenica. This was followed by several pieces of Klezmer music. Howard Coleman played his own guitar arrangements of original pieces and explained that Klezmer music had been lost following the Holocaust but since the 1980s it has been more readily available and is now gaining in popularity once more.

The rollercoaster of emotions continued. The children’s art competition organised by local artist, Claire Jackson, produced astoundingly moving artwork from four local schools including the Children’s Hospital School. One youngster explained that she used a curled up body to portray the emotion of loneliness and fear. Another chose the darkness of a silhouette to express a man’s desperation. His father was overwhelmed saying,

‘I didn’t realise my son could express such emotions through art.’

Professor Aubrey Newman ended the evening with the keynote speech. He has presented every one of the keynote speeches since the annual event began 19 years ago but said that this year’s theme, Torn from Home, had particular resonance. He began by reminding us of the number murdered during the Holocaust – six million, a number impossible to comprehend, but still the murders continue in Rwanda, Cambodia, so many places and so many people living in fear of their safety, even in our own country where anti-Semitism has now re-emerged. He concluded by saying that this year’s theme reminds us that home should be a place of security. We are all entitled to a safe home.