OK, so my bird count is not quite as bad as that but I'm convinced those birds know that I want to count them. They willing pose and posture for me as I hover by the kitchen window on any other day of the year but on bird count day the numbers are always down.

Thankfully Woody made an appearance. He's our regular Woodpecker. He visits at least once a day with an entourage of small birds. It's soon obvious why the small birds faithfully follow him. He positions himself sideways on the bird feeder and pecks like a mad thing while his entourage sit on the ground beneath him pecking at the windfall... or should that be woodpeckerfall?!

I've contributed to the RSPB survey for many years and in the past it's always been a bit of a squeeze, juggling my many weekend commitments in order to give myself an entire hour to sit and watch and count. This year there was no such problem. I could have spent the entire morning on my hour's count...  but of course I stuck to the rules and counted for precisely one hour. My full hour's tally is below.

Once the time was up I got a tripod, the binoculars, my mobile phone and some gaffer tape. I wanted to try out something that I'd seen on last month's BBC TV Countryfile programme. It is possible to take a zoom-lens photograph using an ordinary phone camera and a pair of binoculars but the binoculars have to be securely in position, hence the gaffer tape. You move the phone around until you can see a clear dot of the image and then very slowly move it towards the binocular lens. One hand shake and the image is lost so it took me some time to get it set up. My next task was keeping still enough so that the birds returned but was it worth all the effort? I'm not sure it was.

Woody returned before I'd got the binoculars set up so this is just a click and crop photo: 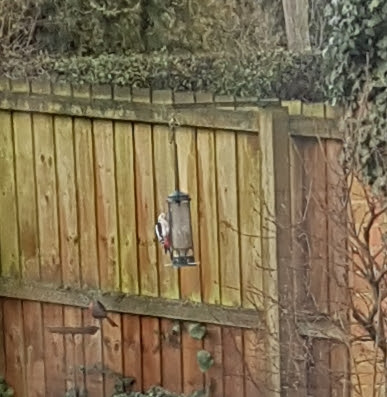 And this is a coal tit who kindly posed while I faffed around trying to line up phone and binocular lens: 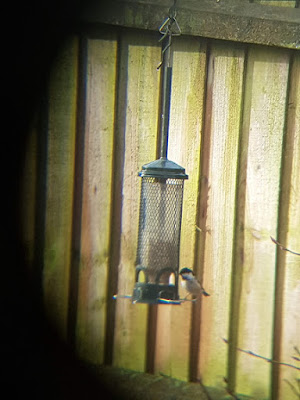 Verdict: It could be worth the effort but I guess I need to practice quite a bit more!!
Has anyone got any other tips for capturing images of wildlife without getting the full zoom-lens-expensive-camera kit?
My bird count tally:

Not bad for a suburban garden.