The Guildhall and its Ghosts
Five ghosts haunt Leicester’s ancient Guildhall. After Henry VIII banned guilds, the hall was used for council meetings, court hearings, police cells, lavish banquets, plays. They say that Shakespeare was a visitor. Could one of the ghosts be Hamlet’s father? 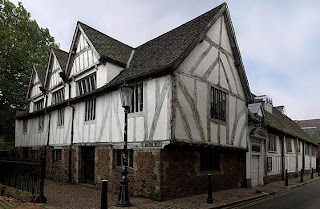 Leicester's Guildhall which was built over 600 years ago

A gibbet hanging in the old police cells
The cells are open to the public and well worth a visit.

Follow this link and scroll down to the picture shown above
to view one of the ghostly occurrences recorded when
Rupal Rajani from BBC Radio Leicester investigated some local ghosts...

Tomorrow (Saturday) is my blogging day off. I will be posting up 'H' on Sunday. Have a great weekend.