Books that have stuck in my mind

I’ve been given the Booker Award. Not THE Booker Award, as in the Man Booker Prize. That would be silly. This is a blogging Booker Award presented to me by the lovely Kathy McKendry from Imagine Today. My task is to list out my top five favourite books of all time and then pass the award on to five more bloggers.

Picking five books is not easy. There are so many I could have chosen. Having said that, I’m not an obsessive reader. If I’m not instantly gripped I’ll often discard a book rather than ‘plough on’. I’ve selected the following because the stories have stuck in my mind and I didn’t once want to stop reading, even the one that I hated! 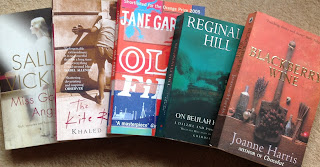 Miss Garnet’s Angel by Sally Vickers
I read this shortly before we went to Venice. Mr A had read it too and we spent a fascinating morning retracing Miss Garnet’s footsteps.

The Kite Runner by Khaled Hosseini
I hated every painful plot-turn of this story and normally I’d have stopped reading right near the beginning but I was totally gripped. I couldn’t bear it yet I couldn’t stop reading it and I’ll never forget it.

Old Filth by Jane Gardam
This book was recommended by a friend when I needed cheering up and it certainly did that. Old Filth, an elderly International Lawyer, is a fascinating character. Gardam weaves a tantilizingly complicated web of relationships, much of it set in the days of a fading Empire.

On Beulah Height by Reginald Hill
I flicked through the pages before taking this photograph. They’re going a browny/yellow, the way old paperbacks do, but I was drawn in once again by Hill’s sometimes hilarious, often moving use of language. [This blog post would have appeared a little earlier if I hadn’t just reread Chapter 2!]

Blackberry Wine by Joanne Harris
This is an unusual book and I know a number of people who have said, “You don’t mean that one where the bottle of wine tells the story?” Well yes, but that’s not why I’ve chosen it. I loved the suggestions of supernatural. I loved the relationships and once more I couldn’t put it down.

I'm going to pass this award on to the following bloggy folk:
[Apologies if you've already received one.]

Anne Mackle who blogs at Is Anyone There?, recently set up a new blog called Books with Wine and Chocolate and isn't feeling too well at the moment so "Get well soon, Anne!"
Francene Stanley at Stitching Words
Susan Clow at Getting a Word In
Annalisa Crawford at Wake up, eat, write, sleep
Susan Roebuck at Susan Roebuck