Yardley talc - We all used talcum power in those days, bathroom floors white with it, skin pores clogged with it, the air full of lavender powder.

Y Memories:
Yardstick - I still can't think in metres and centimetres but I no longer think in yards. There are three feet to a yard and a yard can roughly be measured from your nose to the tip of your middle finger. I can remember salesmen measuring out yards of material in this way when I went shopping with my private dressmaker Grandma and Great Aunt. They had a wooden Yardstick in their workshop and while they sewed I used it as a hobby horse. *Giddy-up Yardstick*...

...and now I'm really excited because Mr A has produced THE Yardstick. It was in a cupboard for safe keeping and here it is... 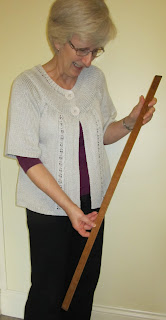 Youth culture - Teenagers were 'invented' in the 1950s. Before the war people in their teens went to work and dressed exactly like their parents and this continued during the war where they fought alongside adults.

In the 1950s a new culture emerged with teddy boys, pop music, coffee bars, rock and roll and clothes that were fun and, most importantly, different from the older generation. The culture was further spread by stars like James Dean in the film, Rebel Without a Cause.


Yodelling - Frank Ifield, Karl Denver, what was it about pop singers and yodelling in the 1960s? Aren't you glad the fad is over? *yod-ell-ay-ha-ay*

Iconic Song:
Yesterday by the Beatles with over 1,600 cover versions

The Yardbirds who provide the...

Y Music:
The Yardbirds singing For Your Love

Almost there! What have I missed today?
If you're enjoying these memories then you'll also enjoy

Anne Mackle's blog at Is Anyone There?
Her A to Z Challenge is about memories of the 1960s and 70s.
Posted by Rosalind Adam at 08:30