I'll never know how you feel

On Friday evening I was felled by a flu bug. I could feel glands swelling up where I never knew I had glands. My stomach rebelled against food and I’ve spent the best part of the last five days curled up on the settee with Mabel the Cat watching daytime TV.

I’ve tried to explain to friends and family over the phone exactly how I feel but each one has a different take on it.
“Get yourself up and moving and it’ll soon go away.” No it won’t.
“I’ve had that too and it only lasts a few days.” I suspect you haven’t had this bug, not exactly this bug, because this is my bug.

What I wanted to say was, “You don’t know how I feel,” but I didn’t because that would sound rather pathetic. After all, it’s only the flu, but it is true that no one can possibly know how anyone else feels in any given situation, no matter how empathetic they are. 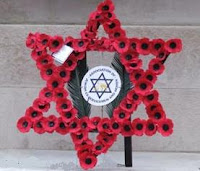 On Sunday morning, with this thought in my mind, I curled up with Mable the cat and watched The Remembrance Day Parade on the TV. I watch it every year. It makes me think of my Dad. He always went down to London and marched alongside other members of AJEX, The Association of Jewish Ex-Servicemen. He always made careful preparations for the trip, ensuring that his poppy was smooth and perfect, that his coat was brushed and clean. He always came home cold, tired and silent.

In 1977, at the age of 55, he became seriously ill. We didn’t yet know that it was Cancer and that it was too advanced to treat. This was the first time since the end of the 2nd World War that my Dad did not go to London for the Parade. He died the following week.

And so I watch the Remembrance Day Parade every year and think about my Dad.

Was he traumatised at losing close friends in the war?

Or did he miss the camaraderie and organised life that National Service had given him?

Did he see terrible things when he was posted somewhere in the Middle East?

Or did he relish the new skills that came from being in the REME, The Royal Electrical and Mechanical Engineers?

My Dad never talked about feelings. It was the way things were in those days, and besides, I could never have known how he truly felt, however hard I tried. The only feelings I can really know are my own...

...and now excuse me while I take two paracetamol and curl up on the settee with Mabel the cat.

Have you ever longed to know how someone else is truly feeling?