Why does history hide in holes?

To get from our house into the City centre we go down the main London Road but for the last month it has been awash with cones and construction vehicles. The council are laying pipes down the centre of the road.

We drove past yesterday and, looking into the hole, we saw the old tram lines exposed. The centre of London Road did once carry tram passengers so it came as little surprise to see the rails but why were they in a hole? How did our road and pavement levels become so much higher in such a short space of time? The houses along that stretch of road are Victorian and so does this mean that they had higher steps up to their front doors or were the pavements in those days raised up from the road? And what would happen if workmen continued to put new road surfaces on top of old ones?

You only have to view an archaeological dig to see that this phenomenon does not only apply to newly tarmacked roads.  Over the other side of Leicester is The Jewry Wall with its excavation of an original Roman Bath. It’s considerably lower than the present pavement level so how did this come about? Is it true that workmen demolished old buildings and simply built on top of the rubble? Are we living on top of hundreds of years of dirt, rubbish and old bricks?

I did a bit of Googling and discovered that in the 1580s it was estimated that the streets of Rome were 30 feet above the level of the ancient Roman roads. How much higher would they be now? Apparently each year an inch of dust falls on Rome. This is made up of leaves, pollution, sand from the nearby coast and a stream of powder from hundreds of ruins dissolving steadily in the wind. It’s an amazing thought.

If our streets are so much higher than those of our ancestors then is the world getting fatter? Are we steadily rising up into space? Will we soon be able to reach for the moon? It’s a fanciful notion... or is it? 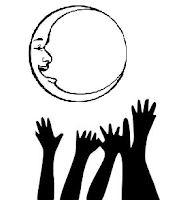