Today is the first day of Chanukah, the Jewish Festival of Lights. In the UK it also happens to be the shortest day of the year... so it’s a time when we all need light in our lives in more ways than one.

Chanukah lasts for eight days. We have special candlesticks called Menorahs or Chanukiahs. When I was in Jerusalem in October I bought myself this lovely new Chanukiah. [Did I mention that we went to Jerusalem?! I did! Whoops, I do keep repeating myself!]

The middle branch is the lighter candle, called the shamash, which is used to light the other candles. Each night an extra candle is lit until on the eighth night there are nine candles burning. It’s a really fun time for the children who look forward to a small gift as each candle is lit.

Chanukah commemorates a miracle, a historical event that took place over 2,300 years ago. The Jewish temple in Jerusalem had been ransacked. When Judah and the Maccabees reclaimed the temple they found that all the oil had been contaminated except for one small jug which held enough for a single day. There’s always a light burning in a Jewish place of worship and so the oil lamp was filled and lit. Then a miracle happened as the tiny amount of oil stayed lit not for one day but for eight days, enough time for fresh oil to be prepared. 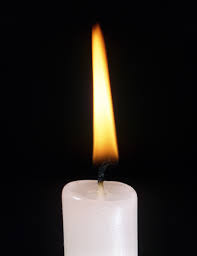 But when we light the Chanukah candles today we also celebrate the power of light. If our house is in darkness we stumble and fall over each other. The same can be said of the world. If we light a candle to light the world...

if we ALL light a candle to light the world,

then there’ll be no more darkness, no one will stumble, none of us need fall. Maybe one day.

Here’s a fun message from a cartoon character called Rabbi Infinity that shows us how light is more powerful than dark. It's called A Little Light.

Whatever festival you’re celebrating, or about to celebrate, may it be a happy, healthy and peaceful time for everyone.