... even if it does mean another change.

I’m always going on about how much I hate changes and it’s true. Even as I type this, Mr A is cutting down a wisteria. I fought for that wisteria to live. It provides green leaves outside our bedroom window but Mr A was adamant. The problem is that it hasn’t flowered for about ten years now and, as Mr A says, “What use is a wisteria that doesn’t flower?” 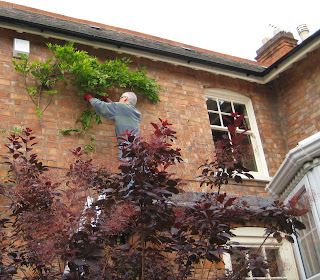 He’s got a new one to take its place but it’ll be years before it reaches those heights and now I’m going to have to look at bricks from my window instead of leaves... I hate changes.

But there’s one change soon to arrive in our house that I won’t hate at all. Mr A is getting his driving licence back!! After one and a half years of having to rely on me to drive him everywhere he’ll be regaining his independence. All he’s waiting for is the licence to arrive in the post. It’s almost like a kid waiting for the postman on his birthday.

When his eye sight was first affected he was on a course of chemotherapy, high dose steroids and Gabapentin. The specialists still aren’t sure if it was his condition or the treatment that caused the problem but either way he couldn't see well enough to drive. I’ve always been a reluctant distance driver and so we were both uncomfortable in our new roles as 'me the driver' and 'him the passenger'.

For much of last year I drove no further than the hospital and back because he was so ill, but over the last few months his health has improved and he’s been eager to travel once more.  I’ve had no choice and in a way it’s done me good. My driving confidence has improved no end. I’ve driven to Manchester and back two weekends ago and down to London last weekend and I’m determined not to lose that confidence once he’s driving again...

...although there is something that I definitely will be losing, exclusive use of our car! But one look at the grin on his face makes it well worth it... I think!