My words through an artist’s eyes

I’m trying something new with my writing. I’m working with an illustrator. I suspect a couple of sharp-eyed followers will already have noticed a contradiction. Two posts ago I wrote of my dislike for change and now I’m about to embrace it. But when it comes to writing, I’m always keen to explore different styles and if I ever stop trying to improve my work then it’ll be time to hang up the keyboard.

I have my writing group to thank for this idea, yet again. [They’re lovely, are my writing group!] We all belong to a children’s book group which meets once a month to read and discuss children’s books... and to have lunch, of course! One of the members is an artist. Her name is Sue Hague and whenever we have a meeting at her house we are in awe of her artwork, especially the finely detailed flower paintings. She is passionate about observing and recording all those tiny details in the world around us, the details that most people don’t notice... the same details that I, as a writer, try to record with words, whereas Sue uses a mixture of acrylic, watercolour and soft pencil.

Last week Sue ran an art workshop for us writers. We’ve never done anything like this as a group before. It was an amazing experience if a little messy...

Our first task was to rub oil paint onto an acetate sheet and scratch a picture onto paper which had been placed over the top of the paint. My result was a little smudgy but the activity had been satisfying and absorbing in a compulsive sort of a way.

We worked with materials that I never thought could go together... like a pen, some bleach and a sheet of soft coloured paper. The effect appears gradually. It’s another fascinating process. This isn’t my attempt. It’s Pippa's. 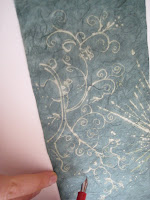 I didn’t produce anything that would hang on my walls but then that wasn't the aim of the morning. What I did come away with was a lot of inspiration, especially when it comes to looking at those finer details of life that are all around us... but there was more. I had a chat with Sue about the art of illustrating and it was then that we planned our collaboration. I have a number of children’s picture book manuscripts, words only, with written illustration guidelines where relevant. I have a rough idea of what the pictures might look like but I was interested to see if Sue’s expert input would add another dimension to my work.

As soon as I got home I emailed a manuscript to her. She came straight back to me with ideas that were already ‘running through her head’. Changes began to happen, improvements began to emerge, as she suggested some fine tuning to my story line, things that I wouldn’t have thought about on my own. She’s now working on some rough drafts and we’ll be meeting up very soon to merge our ideas. We’re hoping to make a joint submission and although we both know that it could well join my list of rejections, it’s been extremely useful to look at my words through an artist’s eyes... and who knows, it might even be accepted!