Games from my Childhood 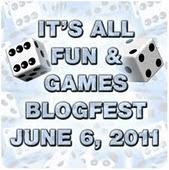 ...but there are so many games to choose from that it’s almost impossible to select three.
When I was a girl, games really were games. You could lose yourself for hours and hours without using a single battery or charger pack and so, in reverse order, my top 3 games are as follows:
In 3rd place is Snobs
(in other areas of the UK it was also known as Stones, Fives or Jacks) 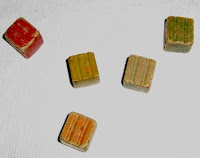 I had five small cube shaped stones. They were made of china clay and each one was a different (and very pretty) pastel shade. The idea of the game was to throw them on the floor and throw one up in the air while picking them up one at a time, then two at a time, then three and one.
Finally we threw the handful up and tried to catch them all on the back of our hand. [I can’t quite remember why but I remember loving it.]
In 2nd place is Skipping
I had a small rope of my own (no fancy handles, just a piece of rope) and I’d skip for hours in the back yard but the best Skipping took place in the playground. There was always someone who had a very long rope and this very long rope was always being turned by two kids. The rest of us would stand in line, run under the rope skip and run out again.

I can only remember one skipping song:
‘Two fat sausages
Sizzling in the pan,
One went pop
And the other went bang.’
On the word bang we had to stop skipping and jump astride the rope.
You see what I mean. Life doesn't get any more exciting than that! Today's kids don't know what they're missing!
And now for the winning game
In 1st place and a clear winner is *roll of drums*
Double Ball
With two rubber balls and one brick wall I could spend a whole morning – a whole day – playing Double Ball.  I’d chant endless rhymes (but I can’t remember a single one!) and I’d throw the balls under arm, over arm, bounce on the ground, clap my hands between catches, one ball up in the air and then back onto the wall. The combinations were endless and I’d pride myself on never dropping them. I could even have kept going right through dinner (except Mum didn’t let me).
[These days my favourite game is far less active. I’m totally addicted to Bridge. It’s the best thing I learned to do since Double Ball.]

Can anyone think of those songs we used to sing while we threw two balls up against a wall? I'm going crazy trying to remember them!