Worm Moon plus lots of Festivals

Last night was the Worm Moon, the third full moon of the year. I didn't see it. The clouds were thick, the wind was vicious, but I knew that Worm Moon was there, somewhere above the swirling nebulae. (Did you know that every full moon has a name? I thought that only applied to the Harvest Moon.)
Apparently it's called Worm Moon because the earth has warmed up enough for the worms to come to the surface, providing a culinary perk for robins and various other small birds. I only have to watch our resident robin and his partner to know that this is correct.
This year the Worm Moon is also called the Paschal Moon because it's the first full moon after the Spring Equinox. This got me thinking. Paschal is from the Aramaic 'pasha' and the Hebrew 'pesah'. It means 'the passing over'. The word refers to both the Christian festival of Easter and the Jewish festival of Passover/Pesach, (it's in Exodus Chapter 12 verses 13 to 23). If I'm interpreting it correctly both festivals, although very different in practice, are about freedom and salvation.
They're not the only festivals occurring this time of the year. It is rather a busy time for festivals. So here's the festival run-down. I hope that I've illustrated them appropriately and that I haven't missed any:
Last week the Spring Equinox was celebrated by Pagans.

The Spring Equinox is the new year in Iran and is called Nowruz. 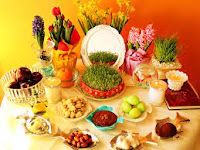 The Jewish festival of Passover began on Saturday evening and lasts for eight days.

Yesterday (Sunday) was the first day of the Hindu festival of Holi.

Today is the Muslim festival of Shab-e-Barat.

Today is also the Sikh festival of Hola Mahalla.

The Christian festival of Easter begins this week with Maundy Thursday followed by Good Friday.

I don't pretend to understand the finer nuances of all these festivals but I have a feeling that incorporated in all of them is a hope/prayer for freedom, peace and security. If we all hoped/prayed together then maybe our joint voices would have an effect. Now, wouldn't that be a result!
Whatever festival you are observing right now, have a good one.
Posted by Rosalind Adam at 13:05