I have lived in Leicester all my life and remember when an area known as Frog Island was buzzing with industry, filled with soot-grimed factories and belching chimneys. Now the factories have closed down and those businesses that have survived have moved to out-of-town units. Some of the old buildings have been demolished, others have become derelict resulting in inevitable fires and vandalism. There are plans to redevelop the entire area but before new foundations are dug the Leicester University team of archeologists led by Richard Buckley (the man who led the team that discovered Richard III) took over one section of land in search of historical gems and once again they were successful.

The area for the dig is just outside the water-bound triangle that forms Frog Island, between Great Central Street and Highcross Street, and was once the Stibbe factory. It is not far from the Jewry Wall Museum where a carefully preserved section of remains of a Roman building housing the old town's baths is open to the public. This is the oldest part of Leicester and so the discovery of remains was not a surprise. What has been spectacular though is the number of well-preserved finds.

First a memory of my own from the area. The entrance to the site is opposite what used to be Leicester's Great Central Railway Station. It was the station where Leicester holiday makers took a train to the nearest seaside resort of Skegness and holds fond memories for many of Leicester's older residents. Only the entrance to the Parcels Office remains (as shown below) but it is evocative of the style of the building which was closed down in 1969, one of the many victims of the Beeching Report. 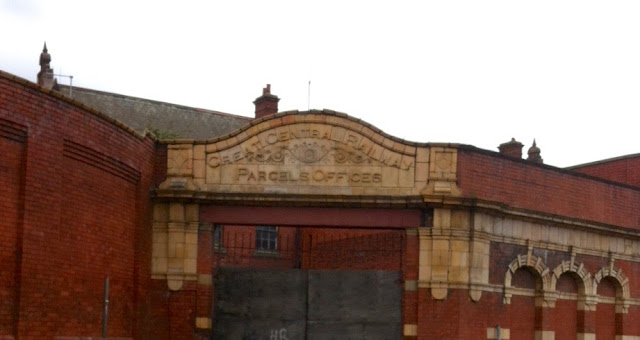 As for the actual dig, the finds include two Roman Streets, a well preserved mosaic over a hypocaust (underground heating - they were sophisticated in Roman times or was it that they found England freezing cold compared to Italy?) and a variety of artefacts including coins, brooches, hair pins and games. This elaborate woven mosaic is said to be the finest example found in Leicester for more than 150 years. 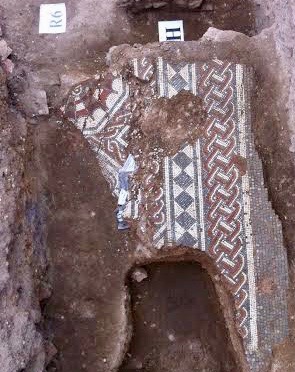 If you'd like to read more about the archeological dig and findings the Leicester University has issued this statement: Largest archeological excavation in Leicester.

Which just leaves me with one of my favourite ruminations. How did old stuff get to be so low down in the ground. I will elaborate - if the floors from these Roman remains are beneath present day ground level, which they clearly are, then why is it that the nearby All Saints Church is at street level? The church was built not long after this period although the actual date of the build is unknown. It is believed to have been mentioned in the Doomsday Book. So did people climb up steps to access the church? I suppose we'll never know.