We have created a Richard III extravaganza. Last week we gave our first performance as part of Leicester's ArtBeat Festival and I'm delighted to say that it was very well received.

Nimisha Parmer showed us the story of the Battle of Bosworth using the ancient Indian dance style of Bharat Natyan. Her son, Aayush, accompanied her on the drums. 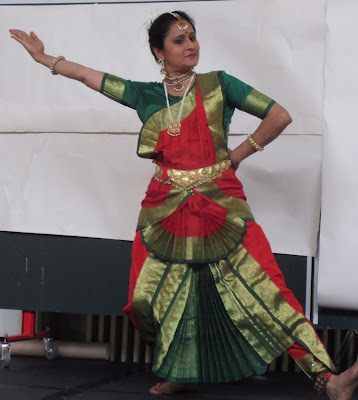 I took to the floor next, performing a rather tongue-in-cheek interview between a modern day reporter and the Witch of Daneshill. It's all in my book if you'd like to buy one - The Children's Book of Richard III. I went on to explain how a King's body came to be under a car park in Leicester.

Our grand finale was Richard Buckley, head of Archaeology at Leicester University, the man who led the dig that discovered Richard III's body. He gave us a fascinating insight into what the dig was like and then produced a 'King' in full period armour with sword, dagger, halberd, the lot. It was not only the kids who were excited. We were all fascinated by this King-cum-knight in almost shiny armour.

There are plans for repeat performances so if you missed this one then watch this space for the announcement of our next Richard III extravaganza.