Yesterday I took part in Rik Basra's dynamic Pass It On Campaign. Before I talk about our excitement at collecting the flag from the Leicester Fire Brigade, I shall explain a bit about the campaign.

Every year, 2000 people in the UK need a stem cell transplant to help them to battle against blood cancers but suitable donors are often hard to find. The Rik Basra Leukaemia Campaign has organised a month-long event to encourage people, especially from minority groups, to sign up to the Anthony Nolan Bone Marrow Register.

A flag is being ceremonially passed between Leicester groups by members of the Leicester Fire Brigade. It is covered with signatures of all those people who have registered and, when the project is completed, the flag will be displayed at the Leicester Royal Infirmary Cancer Unit. The photographs below show myself and Miriam, Chair of the Leicester Progressive Synagogue, collecting the flag. The firemen made quite a display of passing it on to us with ornamental firehoses playing and a huge crane ladder. We were on the balcony watching as the flag swung into the air and into our hands. (That's me with the yellow jumper on.) It was all very exciting. 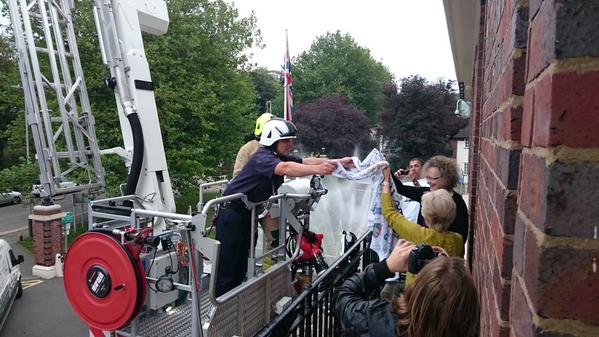 We then took the flag back to the Progressive Synagogue where a small but enthusiastic group of supporters turned up to register and add their signatures to the flag. 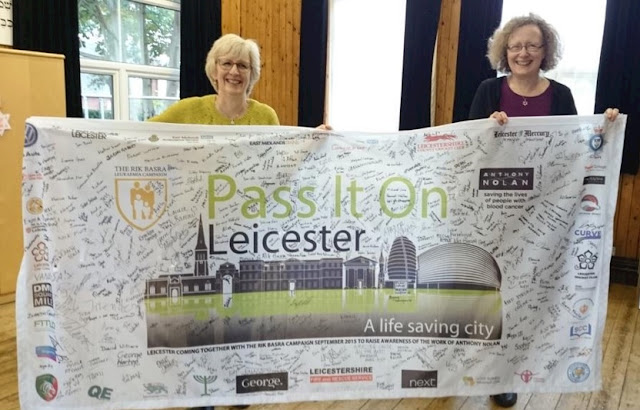 Of course we would all willingly have signed up too but for the age restriction of 16 to 30. As Miriam pointed out, even our children are too old to contribute! That hurt, but at least we were able to do our bit to spread the word.

You can find out more about Rik Basra and his campaign at his webiste, The Rik Basra Leukaemia Campaign