A Bit Black Over Bill's Mother's

You've got to feel sorry for Bill's Mother this summer. For those of you who are bemused by this statement, it is the local slang for describing that darkening sky that precedes a downpour. I have no idea where it comes from and have found a number of conflicting explanations on the Internet. If anyone knows its derivation then please do tell!

So far this summer apart from one really lovely hot day, which, if I'm not mistaken, was a Wednesday some time in June, I've lost count of the number of times I've said,

"Ey Up! It's a bit black over Bill's Mother's!" followed by a cloud burst of rain.

The scene shown below was the state of the sky from the kitchen window about half an hour ago. This was followed by rain which was followed by sun which will, no doubt, be followed by more exclamations of regret for Bill's Mother.

I wonder what we would talk about, here in the UK, if it wasn't for the weather. 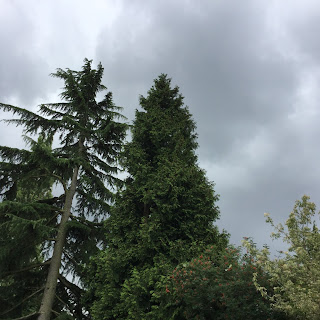