When it's appropriate to blog in-depth thoughts...

...and when it’s not appropriate.

2013 was my third year of taking part in the A to Z. The first year, as a relatively new blogger, I found it exciting. I would go as far as to say exhilarating. I learnt a lot about the etiquette of blogging and met many bloggers, some are still blogging friends. The second year continued to help in my explorations around Blogland and I met more lovely Bloggers, made more blogging friends. This third year didn’t work quite so well for me and I think that the blame lies with my choice of topic.

For those who didn’t follow my A to Z posts, I selected snippets of song lyrics and briefly discussed deeper issues that they raised. I was forgetting how manic A to Z Aprils are. My blog posts were well visited and well received but the main enjoyment and discussions were about the songs and their memories rather than any deeper meaning.

But all is not lost!

Those issues are worth having a little more time invested in them. So over the next few months I will be dropping in the occasional 'lyric snippets in a little more depth' post so we can really get our blogging teeth into the issues raised. A to Z, I now realise, is not a time for depth. 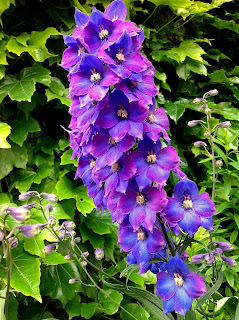 I'm talking here about a whole range of issues, from mental illness to the environment to caring for each other to war and more. One theme that was common to all of my song lyric posts was the memories that songs can evoke. I’m doing a bit of a DJ link here because it’s not only songs that have this power. Flowers can be a wonderful memory prompt too.

Last year I blogged about the way that my Mum always recited the A. A. Milne poem Delphiniums Blue and Geraniums Red  as she dragged me along to school [and, no, that wasn’t when I was 15. It was when I was 5!] Delphiniums always bring back lovely memories of Mum and I took this photo today of one of the best delphinium heads our garden has ever produced.

I still miss you, Mum.

If you're interested in the theme of flowers evoking memories then do visit Alex Gutteridge writes... This blog post called Grandma's Garden is well worth a read.