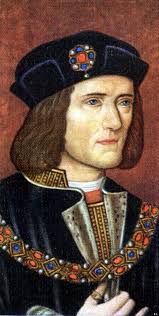 This week I received an award from Anne Mackle at Is Anyone There? Thank you so much, Anne. In accepting the Award I have to announce my highlights from 2012. Last year was a year of mixed fortunes for me, many of which don't deserve further blog post space, but there is one event that is screaming to be talked about some more... Richard III.

For those who missed the news, and my blog posts from September 2012, archaeologists found the remains of what is thought/hoped to be King Richard III who died at the Battle of Bosworth in 1485. His body was brought back to Leicester but there was no record of its precise internment. You can read all about it in my September blog posts which I've linked here, here and here. Going along to view the dig was, for me, one of the most exciting highlights of 2012 and so it is to him that I dedicate this Award.

Archaeologists implied that there was little doubt that they had found the remains of this much-maligned King but for the last few months scientists have been studying DNA to see if it can be irrefutably confirmed. An announcement will be made in the first week of February and this will be followed by a television programme on Channel 4 which documented the entire dig and the subsequent investigations.

I can't wait to hear the news, watch the programme and find out what will be done with his body. Rumour has it that he will be buried at Leicester Cathedral and although the Cathedral is Church of England and Richard III was Roman Catholic, it would be a fitting place for him, especially as it's in the next street to the car park where his remains were recovered - assuming, of course, that it is his remains!

Watch this space for more news as it emerges!