Beware of the Cold

A friend tells of a skiing holiday he had many years ago when he was in his 30s. The sun was shining and he didn’t see the need for his hat. He set off with his friends and all was well until he inexplicably felt the need to sit down in the snow. Fortunately his friends recognised this as the beginnings of hypothermia and cajoled/supported him back to the hotel.

We all laughed at the anecdote and I thought nothing more about it until last week. Our boiler broke at the start of one of the coldest weekends we’ve experienced in a long time. British Gas couldn’t send anyone out for two days [We pay monthly into their Service Plan too. Outrageous, isn't it!] and so we were left to cope. It was miserable but at least we had a gas fire to huddle around.

The snow fell continuously. The temperature dropped to -5. Every surface of our old, drafty house froze beneath my fingers. After 24 hours I felt strangely detached. I didn’t want any lunch. I didn’t want to move out of my chair. I didn’t want to do anything. I thought about old people living alone. How easy it would be to continue doing nothing, to allow the cold to enter my bones, to slip into a chilly sleep. Fortunately for me, Mr A was there to cajole and so, with hands that wouldn’t quite co-ordinate and oats tumbling to the floor, I made myself a bowl of porridge.

It was only a brief incident but I can’t stop thinking about the detachment and the way my hands couldn’t open an ordinary packet of oats. It was scary and so if our heating fails again [and I do hope it won’t] I’ll try and do something active [or book into a hotel!] while I await those elusive British Gas people because you don’t have to be old to suffer from hypothermia.

I decided to include a photo of today's view from my writing den. It may be pretty but it's also cold and inconvenient. Roll on summer! 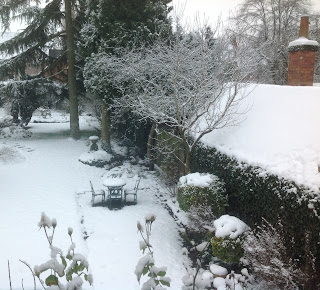