Looking forward to a better harvest

The vegetables that Rod planted last year were ready for harvesting when he was in hospital. He was too ill to eat any of them.
This year he’s in the garden most days, gaining in strength and putting on weight as he digs the earth and plants his seedlings. His peas are coming along nicely. I have to admit they rarely reach the saucepan. We eat them as we pick them but last year, after Rod’s stem cell transplant, raw vegetables were a definite ‘no-no’. 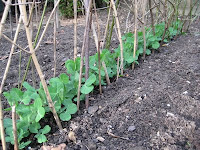 His broad beans are already flowering and there’s nothing creamier than young home-grown beans, but last year he couldn’t face them. 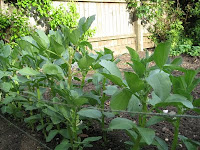 And the potatoes have settled in now that we’ve had a bit of rain. Last year they tasted amazing but everything to do with potatoes made Rod sick. 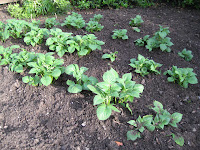 I must admit my preferred form of gardening is to wander round smelling the flowers. I couldn’t resist sharing with you a red rose that I photographed a few minutes ago. When I was a kid I had my own patch of garden. Dad planted a red rose bush in it for me. Red roses always remind me of Dad. 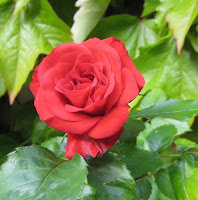 Rod’s biggest harvesting regret last year were his strawberries. It was a bumper crop but soft fruit was definitely not allowed with his lowered resistance and I hate strawberries so they were left for the birds. This year I reckon he’ll have the bowl and cream all ready and waiting. Roll on harvest time. 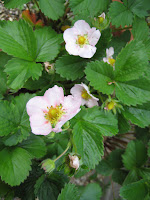