What makes a person powerful?

I have been awarded a Powerful Woman Writer Award so thank you very much to Deirdra Eden Coppel for that. It’s always exciting receiving a blog award and this one is no exception. It's great that someone has viewed my writing as powerful but it has set me off asking rather a lot of questions:
If I am a powerful writer does that mean that I'm a powerful person? I certainly don't feel powerful. I’m stubborn, yes, and sometimes a tad stroppy, certainly... but powerful? I’ve submitted a strongly worded letter of complaint to the local hospital trust and it looks as if they’re making improvements based on my complaints but does that make me powerful?
So what exactly is a powerful person?
Is being a leader the same thing as being powerful?
Could it be that the most successfully powerful person is the one who does not wield that power like a sword, but spreads it out evenly among their peers creating a fine mesh of support for everyone?

Thanks again to Deirdra who not only gave me this impressive award but set me off thinking about the meaning of power, people and everything... 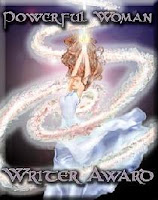 ...and for those who are worried that I’m sounding a little too serious of late, I thought I’d let you know that it’s daughter’s birthday in a few days time, so we’ll be off for a day of pampering at the local spa. I may even blog about it!
Posted by Rosalind Adam at 20:41