Mum is finally out of that dreadful Leicester General Hospital and in a lovely nursing home called Harley Grange. They are not only caring for mum and her illness, they are also tending to the infected bedsores that were caused by the absence of hospital care. To all those NHS people who follow my blog and have urged me to make a formal complaint about the hospital’s negligence, a strongly worded, two pages of A4 will be in the post tomorrow.

Rod succumbed to a nasty tummy bug last weekend and, as his resistance is so low due to the stem cell transplant, it’s taken the best part of the week for him to recover.
And on Monday I pulled something in my back and have spent the week fighting to get mum discharged, moving her and sorting and labelling her things, in a fugue of pain, paracetamol and codeine.
But Mum is now in a caring and safe environment, the sort of environment that I used to think was offered by an NHS hospital. Rod is on the mend and for the last few days has taken over the cooking, cleaning and general running of the house. My back is starting to ease and I’ve just taken a slow walk down the garden where there are green shoots starting to appear. 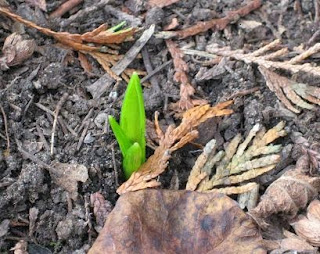