Charity Lunches are Back

For the first time since before Covid, I have been to a charity lunch. It was the Annual Ladies' Lunch organised by LOROS, who provide hospice care for Leicester, Leicestershire and Rutland. A group of us usually go every year but there's been the inevitable two-year hiatus due to the pandemic.

The event is held at the King Power Stadium, Leicester's rather grand football ground - they've come a long way since Filbert Street even if they are a bit low down in the charts right now. It was a chance to dress up and mingle and gaze at stalls full of items that I didn't want to buy and sit with two hundred other women, shouting above the noise of all the chattering and waiting for food to be served to each of us. Sounds less than glamorous when I put it like that but I thoroughly enjoyed it. I wore a bright pink top with floaty flared sleeves - a nightmare in a public toilet but the sleeves survived the outing and so did I.

Two of the hospice nurses gave a brief talk before the lunch. Their speeches were thought-provoking, sad but also positive. They spoke about the way that they help seriously ill patients regain some quality of life. They stressed that they don't just provide end of life care.

I must admit I was dubious about the guest speaker. If we didn't already know who it was then there was a small clue as we all entered the hall. 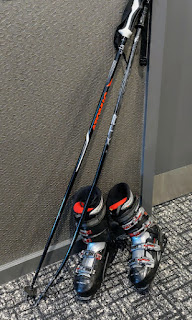 It was Eddie the Eagle, our very own Olympic ski jumper. I wasn't sure how he would hold the attention of over two hundred women in a packed hall but hold our attention he did. The minute he stepped up to the microphone he won us over. What a character - warm and entertaining - and what a story of perseverance. He may have come 58th out of 58 competitors in the Olympic event but his is a story of achieving personal aims against all odds. I was inspired - though not to go ski-jumping I hasten to add!

So the event was a success but it was the weather that finally put a dampener on our spirits as we attempted to pile out of the building. The term 'raining stair rods' has never been more apt. It took the Football Club a good twenty minutes to get themselves organised and armed with huge umbrellas to escort us, two at a time, to our cars. What gentlemen - or were they just desperate to get us off the premises?

I know that lots of you have been doing things, going places, taking holidays but me and Mr A have still been restrained, thinking twice about doing anything or going anywhere. You can't be restrained for ever. It's just not healthy and it's just not living so well done to LOROS for coaxing me back into the wide world. I didn't realise how much I'd missed being real.