A few days ago I spent a number of hours writing a blog post, checking it and viewing it on Preview to make sure it looked presentable. I then had an odd feeling... a kind of deja vu. I did a search on the title, Onion, and realised that I had produced an almost identical post two years ago. I have put this down to the general confusion of multiple lockdowns and Covid anxiety. It has nothing to do with getting older, nothing!! I just did a bit of a Google search and found a mental health site that said I need to do a variety of activities including new activities in order to keep my brain healthy - groan.

On the subject of getting older, and while writing the above-mentioned duplicated blog post, I started to think about my Dad and his electrical prowess. In the early 1960s the only way to listen to music at home -  apart from on the wireless which is what we now call the radio - was to play records on the record player. Records were fragile. The really old 78 rpm records were heavy and would smash if dropped. They could also be heated up and turned into fruit bowls if we got bored with the song! The light-weight vinyl 45 and 33 rpm ones got easily scratched which meant all our songs had a background of clicks and so Dad made us a reel-to-reel tape recorder. He made it from a kit and it worked perfectly. Now we could borrow records and record them. We could also record music from the wireless but that was illegal so I'm not going to mention it here!! No one else I knew had a tape recorder. We were lucky.

It wasn't long before those tiny cassettes took over but the cassette players used to chew them up and then CDs appeared with pure sound and no clicks or chewing ups. Today we can listen to any song we like with online streaming. I would have loved that as a teenager.

In order to take seriously the suggestion from the above-mentioned mental health site I have just gone into the garden and taken some nature photographs. Here is a rose. You can even see a rain droplet on it. Isn't it beautiful! 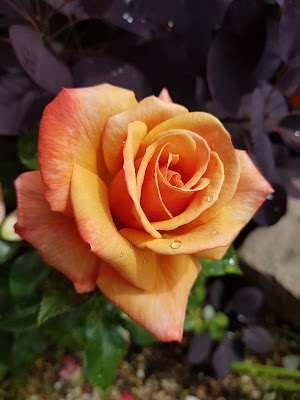