The UK is about to descend into another national lockdown, we saw the first real frost of the season this morning and it's now getting dark long before supper time. I'm running out of useful things to do and so I'm clearing out cupboards. I expect I'm not the only one. I am quite a hoarder and find it hard to throw things away but some of this stuff is utter rubbish and the bin is filling up nicely.

Daughter Update: To those who know me personally you will know that Daughter has just relocated from down South and has bought a house only four and a half minutes away - Yay! She arrived last Thursday and so you might be wondering why I'm twiddling thumbs and clearing cupboards. It's because we're waiting for her to self-isolate from the removals and initial workmen. We will then become a bubble, the three of us, at which point we'll have plenty to keep us occupied. Her house was empty for a year and Rod can't wait to get started on the garden.

Writers' Magazines: In the meantime I'm clearing cupboards. In one cupboard I rediscovered boxes and boxes of old Writers News Magazines. I put a call out on the local Facebook Page and WhatsApp group to see if anyone wanted to take them off my hands but no one did so I settled down to do a bit of rereading. This may take some time: 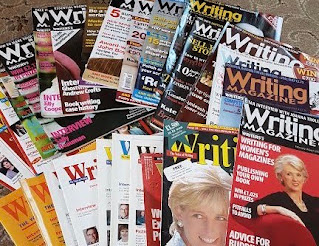 Internet Competition: It's surprising how much of the information in the magazines is now freely available on the Internet. I suspect many monthly magazines have found themselves competing with free Internet content. I flicked through pages containing lists of publishers accepting submissions, suggestions on where to send different kinds of manuscripts, how to best word your covering letter when submitting, etc., etc. I can't now imagine having to wait for a monthly magazine to check on submission requirements and as for covering letters, they have been replaced by a politely worded email.

Writing Letters: Talking of letters, they say that people are starting to write more personal letters during this lockdown/semi-lockdown period. I have not, as yet, turned to the Basil Bond and ink pen but maybe I will. I do have some old letters that I cherish. I have some that Daughter sent to me when she was volunteering on a Kibbutz in Israel some time in the last century. I also have one letter written by Son on the day he left home. I watched him drive off, heading South to his first job and an exciting new career. His car was piled to the top with his life. I waved until his car was out of sight and then I went up to his bedroom, stripped of his world, bed bare to the mattress, but on the bed was an envelope addressed to me and in the envelope was a letter from Son. I cried as I sat on the mattress and read his words and of course I still have the letter. An email or text message would not have worked and would have been long gone.

So, who reading this is going to send a letter or two to friends rather than typing out a quick WhatsApp? I'll let you know next time if I managed to get around to it.