My next MA assignment has to be handed in very soon. We have to write either 3500 words of story or 11 pages of poetry with a theme of 'place'. I decided to be a flâneur and wander the streets of Leicester. I then decided to make life more difficult for myself and write the whole thing in verse. I've used a mixture of free and formal verse which is hard work but fun.

My problem is that I've collected so many fascinating lesser-known snippets of information about Leicester that most of them won't make it onto those precious 11 pages. There are some that are so fascinating, I'd like to share them with you over the next few weeks. I don't have time to write them up in verse, I'm afraid but they're still worth a view.

This week I'm posting up two photos of the remains of a chemist shop on Leicester's High Street. The building is on the corner of Cart's Lane and High Street. It's now a men's clothing shop. You wouldn't even know that evidence of a chemist was there if you didn't look up and scrutinise it's façade. 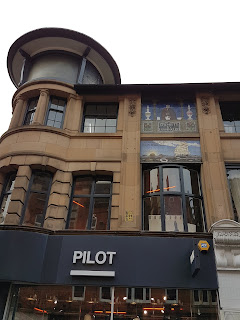 I took the above wide shot and then scanned in closer to see two perfectly preserved mosaics: 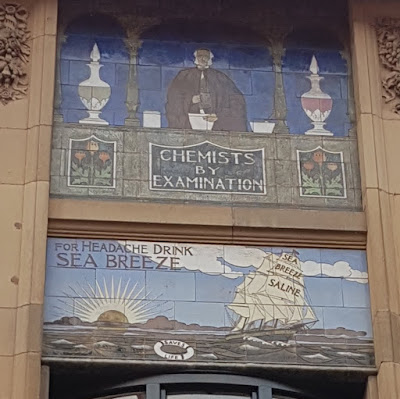 The top one shows a man using a pestle and mortar to mix up a remedy and the lower mosaic is an advert for Sea Breeze, a headache remedy made by the owner of the chemist in the 1880s. His name was T. E. Butler.

So if you've ever walked up Leicester's High Street and not noticed these mosaics, you might like to take a moment to glance up next time you go. They're on the left as you walk away from the Clock Tower.

p.s. I know that as a woman I should call myself a flâneuse but I have decided, just as serious women actors no longer refer to themselves as actresses, so too will I use the masculine form.