Every life has a story to tell. We can’t all talk of major achievements, life-saving inventions or headline-making discoveries, but we all have our own unique story. Several years ago, when I set out to research the ‘lives behind the stones’ in the local Jewish cemetery, I was not looking for the big names. I wanted to know about the lives of the ordinary people, people like myself.

Regular visitors to this blog will remember me talking about this Heritage Lottery funded project that I coordinated in 2014/15. We created a website with information about Leicester's Jewish cemetery and a complete database of the graves providing a genealogical search facility. The website is testament to my team’s commitment and hard work and I am proud of what we created.
(Apologies if you’ve had trouble recently accessing the Jewish Gilroes project website. It has been undergoing routine maintenance but I have been reassured that it's fully functioning once more.) 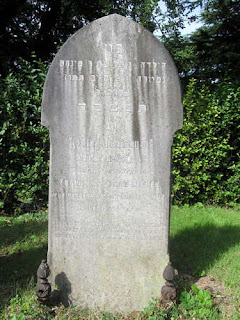 I do regret that we only had time to research nineteen stories. We were not even able to recount entire life stories, but mere snapshots of those nineteen lives. So much has not been told and there are about a thousand graves in the cemetery, so there are more than 900 lives yet, if ever, to reveal their stories. Maybe some were refugees from Eastern Europe in the early 1900s or descendants of refugees. Others may have come later in the 20th century from Germany. They would possibly have been evacuated to Leicester during the Blitz. They must have experienced so much that I will never know about because now their lives have been lost behind the brief descriptions on their headstones.

On the left is the headstone for the very first burial in the cemetery. It marks the grave of a young girl called Nina Rosina Berger who died aged 13. We could find very little about her short life but there was information to be uncovered regarding her family. A small group of us put together our findings and this is the story that I was able to write up for the website. Nina Rosina Berger.

Looking to the more distant past, apart from a few exceptions, only the lives of Kings and Queens, their Chancellors and Priests were recorded. I want to know what the ordinary people did. I want to know about their daily lives, worries, joys, habits. If only they had been literate, with their own blogs and Twitter accounts, think how much more we would know about life in days gone by… or would we be bogged down with their daily recounting of what they had for breakfast and what the weather was like?

Labels: Lives Behind the Stones, research