So much more than moons and Junes

This Denny Randell and Sandy Linzer song has a real 'feal-good factor' to it but then you listen to the lyrics.

'...where did all those yesterdays go
When you still believed love could really be like a Broadway show...'

At what age do you think you stopped believing that love could really be like a Broadway show?
Or maybe for you it's true!

This song is written by Elton John and Bernie Taupin about the Cold War and a fictitious female Soviet border guard.

'...And if there comes a time
Guns and gates no longer hold you in
And if you're free to make a choice
Just look towards the West and find a friend...'

It was written before the fall of the Berlin Wall and the 'warming up' of relations between East and West. How sad that the families in Berlin were split apart by the Wall. How great that the wall no longer exists.

How many more families have to be affected by war, be it a hot or a cold war?

And I could have added:

Sinead's tear in the video of Nothing Compares 2 U was so moving. She says it was unplanned and I believe her. 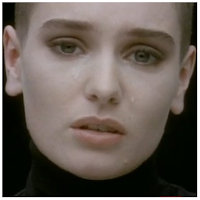 Any more N songs that mean something to you?