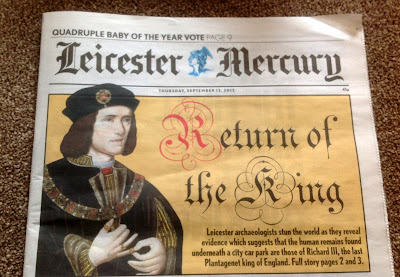 This is today's headline in the Leicester Mercury, our excellent local newspaper.

In case you can't see the smaller print, it says "Leicester archaeologists stun the world..." and indeed they have, because, for anyone who hasn't been following this archaeological dig then allow me to announce that all the evidence points to the amazing fact that...


The body of King Richard III has been found in Leicester.

Yesterday morning a press conference was held in Leicester's medieval Guildhall, an ancient and impressive building, a fitting place for an announcement about a King. Leicester University Archaeology Department, led by Richard Buckley, have found a skeleton in what was once the Choir of  Grey Friars Church. This is where he was said to have been buried all those many hundreds of years ago. I know we have to wait for final proof and completion of tests but... Wow!

This is what they have found:
Records show that Richard III's body was stripped and displayed in the City by Henry VII's men to prove that he was dead. He would have then been buried in the Choir of the Church and this may well have been done hastily.
Philippa Langley, playwright and member of the Richard III Society, said that there was a ballad written shortly after the Battle of Bosworth which claims that Richard died after being 'hit on the head with a poleaxe'.
This shows that the body had been in some kind of battle before his death.
Tudor propoganda made him into an evil hunchback. This is not reliable evidence. More reliable are the witness accounts who saw his body during the three days it was displayed in Leicester and who spoke of certain abnormalities of his back.
Michael Ibsen, a London furniture-maker, has been identified as a 17th generation descendant of Richard III. These DNA tests could take up to 12 weeks.

And I blogged about my visit to the site including photographs at Digging for a King - Richard III, Part II


During the press conference Philippa Langley said that this had been her lifetime's dream. She went on to say that if anyone listening has a dream then please don't ever give up on it because dreams really do come true.