The Sleeper Train to Venice versus EL AL airlines

From the inconceivable to the incomparable
[I’m still blogging on about holidays - Sorry!]

The inconceivable is what I think about the Sleeper Train to Venice. I’m terrified of flying so when, in 2009, we planned a holiday in Venice we decided to take the Sleeper Train from Paris. I thought it would be romantic to travel across the Alps by night and arrive in Venice next morning. I was wrong!

Firstly it was pitch black and you could see none of that beautiful scenery. Secondly, this was no Sleeper Train. This was a Wide-Awake-Screech-Lurch-Clang Train with cabins that were hardly big enough to stand up in.

[Mr A has just asked me to point out that the only thing stopping him from sleeping was me moaning about not being able to sleep!]

The only compensation [and it was a massive compensation] was that this was our view of the Grand Canal as we had breakfast every morning on the hotel terrace. 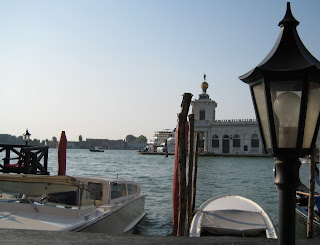 On the other hand, the incomparable is my view of EL AL airlines. Like I said, I’m terrified of flying so when we planned a holiday in Israel we decided to fly by EL AL, the Israeli airline. It’s more expensive than a package flight but I suspected that it would be money well spent. I was right!

Boarding an El Al flight was like entering a crazy village. I forgot that we were about to be suspended high in the air with no safety net. I didn’t even notice that we were over an hour late taking off. This was gold standard people watching! When the staff tried to get us to prepare for take-off few of the passengers saw the need to sit down, or fasten their seat belts, or turn off their phones. The airline staff were very patient. They’d obviously done this before.

Once in the air there were cots to be assembled, babies to be fed and changed, prayers to be said by the men gathering at the back of the plane, not to mention the drinks, nibbles, trays of food and, at the end of each aisle, drinks machines and snacks.

I’d been told that some people never fly to Israel. They walk and now I understand. This was a large plane with two aisles. A number of the passengers spent the entire flight walking up one aisle and down the other... even when we were coming in to land. On the flight home, as we were about to touch down at Luton airport, a lady casually wandered to the toilet as if she were in a cafe. That’s what it was! It was more like sitting in a cafe than being on an aeroplane and it was the first time I’d stepped from a plane with a relaxed smile on my face. As I said, El Al are incomparable. 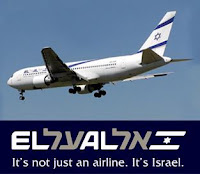