Try saying that after a glass of wine!

I was talking to my sister on the phone the other morning when I noticed two large eyes blinking out at me from the corner of the room.

Fact No. 1 Cats like to catch frogs at this time of the year. Mabel and Charlie bring them into the house without apparently harming them physically... although goodness knows what damage they do to the frog’s mental state of health! 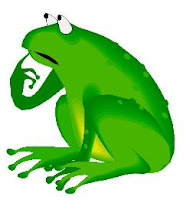 Being a wimp I screamed and Mr A came to the rescue. He scooped up the frog and carried it gently into the garden. He returned with slimy hands and I yelled,

Fact No. 2  Frogs give off a poisonous slime when they get hot. The slime causes hallucinations and can be lethal in large doses. It does explain why princesses keep seeing handsome princes every time they kiss a frog but I wouldn’t recommend it as an alternative to Internet dating! 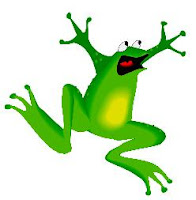 Mr A was only too pleased to return the frog to the garden as they love eating slugs [that was an extra frog fact thrown in for good luck!] but the frog didn’t hang around long enough for us to check if it was a boy or a girl frog.

Fact No. 3  Frogs have ears just behind their eyes. Boy frogs’ ears are as big as their eyes. Girl frogs’ ears are smaller than their eyes. It could be that girl frogs got fed up of listening to those amorous fellers with their extremely loud croaking calls and evolved smaller ears... or it could just be one of those strange facts of nature. 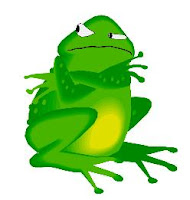 Frogs are so cute... as long as I don’t have to pick them up!