How to Make History Come to Life

Visit your Local Records Office
I once referred to myself as a Nosy Adam and I’m at it again, nosying into other people’s lives, except this time the people are long gone. I’ve been to the local Records Office and I’d forgotten just how much fun that can be. Old newspapers are fascinating. They printed reports on items that ranged from the banal to the unbelievable. If you’ve never been to your local Records Office then you really should give it a try. It’s free. You only need to get a reader’s card, which is no harder than getting a library ticket.
Using the equipment at the Records Office is an experience in itself. All the old newspapers are stored on reel-to-reel film. The machines are large, noisy and have masses of attitude. With a click and a clack, and sometimes a clunk, you thread the film through the viewer and fix the end to the empty reel. There’s a button to move the film forwards, another for reverse and, dangerously close to each, a fast forward and fast reverse. The room is generally quiet except for the occasional clatter of fast reverse, a mild curse from the user and then the click, clack, clunk of the film being threaded into the machine once more.
Last year I went to the Records Office to research my Jewish Voices book. It was a good job that my co-researcher, Judy, was with me. She kept me on track, nudging me each time I became absorbed in one of the more bazaar articles in the old copies of the Leicester Mercury. One 1940s report told how a woman had to wait many minutes to cross the road ‘as a result of continuous traffic’. Another told how a dog had knocked a man over but neither were hurt. A third report talked of the problems experienced by a certain surgeon who spent long hours operating and had trouble standing still. It would appear that they glued his shoes to the floor so that he could safely finish an operation. 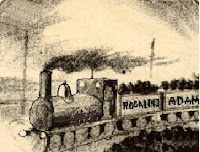 This week I was looking for information about Leicester’s railways for an article I’m writing and I thought the research would nicely support my first short story for Merrilee’s Creativity Workshop. In both cases I found plenty of material plus lots of extra stuff for my writer’s notebook. From a local Victorian Journal I discovered that George Stephenson himself drove the first steam engine to depart from Leicester, a real news-worthy piece. Another report tells about a child playing around the railway trucks that night. He fell, was taken to the Infirmary and ‘there may be need for an amputation’ we are told. Further down the page we discover that a man on horseback chased the train into the Glenfield Tunnel and, taken by surprise by the sudden darkness, grazed himself on the tunnel wall. Banal in news terms but what a fascinating character for a story.
Visitors are only allowed to take a pencil and a notebook into the research room and I needed no more. My article is almost completed and my story for the Creativity Workshop just needs a few tweaks. I have ideas gleaned from 19th century people-watching in the newspapers and from 21st century people-watching in the room. I came away a happy writer.
Posted by Rosalind Adam at 19:45