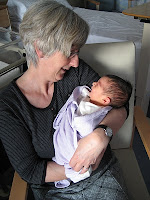 I had an adventure this week. I made an impulse journey to Manchester to cuddle my newborn grandson, my proud son and my exhausted daughter-in-law. I’ve never been on seven trains in one day before. It should have been six. One was a mistake but they provided lots of material for my writer’s notebook.
Train No. 1 – Leicester to Sheffield
Opposite me a suited business man tapped out a report on his laptop while his headphones fed a gentle suss suss into his ears. He was unaware of the drama unfolding in the seat behind me, of an anxious voice on his mobile,
‘We have to close the deal today.’ ...pause... ‘Because I’m leaving the country tomorrow.’ ...pause... ‘You’ll have the money by 5 pm, right!’ I didn’t see his face but he was fast becoming a character in my mind.
Train No. 2 – Sheffield to Manchester
I was on the Trans-Pennine express, not as romantic as it sounds. There were no seats, hardly a spare piece of floor. A man took pity, stood up for me and I fought my pride and accepted. We travelled side by side, him hanging from the overhead rail, me squashed between people and suitcases. He looked as if he’d missed a night’s sleep, eyelids drooping, hangdog jowls. Shame he hadn’t got a seat! As we approached the station he tapped out a text, one-handedly. The reply was swift. His face was no longer hangdog. He pushed his way to the doors and was the first to leave the train.
Train No. 3 – Metrolink Tram to Eccles
I hadn’t seen the centre of Manchester since 1968. It’s changed. The tram provides an excellent vantage point for sight-seeing/nosying. We passed Salford Quays, a square of water surrounded by newly developed flats. The place was deserted except for a man sitting on a bench, his legs outstretched, his head hanging down. The tram veered to the right and he was gone but for a moment longer his despair travelled on in my mind.
[At this point the above photograph should be inserted but Blogger won’t let me move it down.]
Train No. 4 – Metrolink Tram to Altrincham
Yes, I know that I shouldn’t have been on this tram but it didn’t take me too far out of my way and it provided a colourful character for my notebook. He was with his mates. He spoke with a gentle rap rhythm, shoulders undulating, hands gesticulating. The closer we got to the City the more animated he became.
‘We is gonna have, right, one hell of a night, right!’ At Market Street I left them to it. I only hope it was a good night he had rather than a hell of a one.
Train No. 5 – Metrolink Tram to Piccadilly Station
A short trip. I stared through the window until we entered a tunnel beneath the station and a row of faces reflected back at me. My own was tired. I glanced away to the face behind, a young girl, long black curls, red lipstick and a tear rolling down her cheek.
Train No. 6 – Manchester to Sheffield
The train had come from Manchester airport and once again was packed before I even got onto it. I squeezed in beside a young boy and his dad.
‘We’ve had a great adventure, haven’t we?’ said dad. The boy nodded, a plastic aeroplane in each hand. I didn’t mind as aeroplanes dived-bombed across my bags. I’d had a great adventure too.
Train No. 7 – Sheffield to Leicester
At Chesterfield an elderly mother waved as her son got onto the train. She walked back along the platform alone, trying to hide her tears. It’s hard to say ‘goodbye’ to your son and then go back to your own life while he gets on with his, even though that’s why you brought them into the world in the first place. I took another tissue from my handbag.
Posted by Rosalind Adam at 14:38